One of the most unforgettable experiences we've ever had was going to see Wallace Shawn's haunting play The Designated Mourner when it was presented in 2000 in a decaying old gentleman's club down on Wall Street. Shawn's prescient and bracing play, performed by Shawn, Larry Pine, and Shawn's longtime companion and brilliant writer Deborah Eisenberg, was spellbinding and, well, inconceivably intimate. It was staged for a laughably small audience of twenty, and as you climbed the old staircase to the second floor, Shawn himself was waiting at the top to greet you before the performance—more of an incantation, really—began.

The play, which concerns a dwindling group of liberal intellectuals struggling to endure under a brutal new regime, is widely considered Shawn's masterpiece. It's rarely performed in NYC, so we we're thrilled to report that The Public Theater, along with Theater for a New Audience, will finally revive it next June, with the original cast, under the direction of Shawn's longtime collaborator Andre Gregory. And the news gets better: the two theaters will also finally produce the NYC premiere of Shawn's first new play since The Designated Mourner, called Grasses of a Thousand Colors. 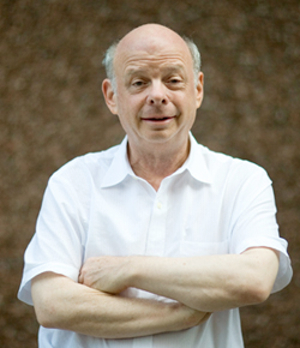 Joseph Papp, the legendary artistic director of the Public, once called Shawn "a dangerous writer. A very rare species. He tells people things about themselves that they don't want to know." Shawn will join Emily McDonnell and Jennifer Tilly in the October 2013 production of "Grasses," who also starred in its world premiere at The Royal Court in London in 2009. We emailed Shawn this morning for his reaction to all this, and he gave us this statement:

New York happens to be my home town, and I am unbelievably happy that a formula has been found that will enable these two productions to be rather conveniently viewable in New York for those who would be interested. Andre Gregory's work in the theatre is intimate and subtle; as in the case of card tricks or tricks with coins, you need to be close to the performance to fully experience the magic, so we can't do what we do for large audiences without diluting the essence of the work. This makes our productions inevitable money-losers even if all the seats are sold.

The brilliant Jeffrey Horowitz of Theatre for a New Audience was instrumental in figuring out, along with Oskar Eustis of the Public Theater, a way that it all could happen. It is very moving to me that these guys, along with the entire staff of their theaters, cared so much about our work that they kept at it tirelessly until they achieved a solution.

I am a very, very lucky playwright, because I've been able to bring my plays to the New York public even though they've always been strange plays, because producers with strange tastes have backed me. Scott Elliott of the New Group has been indefatigably loyal to me, and before him I was backed by Joe Papp, Ellen Stewart, Lyn Austin, Scott Rudin, and Celeste Bartos. I don't have the right qualities to be a producer myself, so without those people my work would almost certainly not have been seen and might very well not have been written.

For more on Shawn's plays, check out our interviews here, here, and here.

#public theater
#the designated mourner
#theater
#wallace shawn
Do you know the scoop? Comment below or Send us a Tip