The Public Theatre's Julius Caesar opened last night, amid ongoing controversy surrounding the title character's Trump-like depiction, and hours after a third sponsor, American Express, distanced itself from the production. That controversy, which Public Theater Artistic Director Oskar Eustis has called a "right-wing hate machine," did not seem to bother the packed crowd, who rewarded the play with a standing ovation once curtains closed.

Just before the lights went down Monday, Eustis took to the stage to address the audience—and the internet—and reiterate the theater's support for the production. "I'm going to ask you to do something that I've never asked anyone to do at a theater before," Eustis announced. "I'm going to make a little statement and anyone who would like to videotape that statement and then post it, this is how we're going to talk to the public."

"When we hold a mirror up to nature, often what we reveal are disturbing, upsetting, provoking things," said Eustis. "Anybody who watches this play tonight—and I’m sorry there’s going to be a couple of spoiler alerts here—will know that neither Shakespeare nor the Public Theater could possibly advocate violence as a solution to political problems, and certainly not assassination.”

Eustis defends @PublicTheaterNY's "Julius Caesar" on opening night: "Nobody owns the truth. We all own the culture" pic.twitter.com/dXncq0sLk8

"This play, on the contrary, warns what happens when you try to preserve democracy through non-democratic means," Eustis continued. "But at the same time, one of the dangers unleashed is a large crowd of people manipulated by their emotions, taken over by leaders that urge them to do things not only against their interests, but that destroy the very institutions there to serve and protect them."

While Eustis didn't explicitly disavow the caving corporations, the theatre did distribute programs with inserts featuring reprinted condemnations from various sponsors, including Delta, Bank of America, and the National Endowment for the Arts (the NEA was never a supporter of the play, but felt the need to clarify that on their website after Donald Trump Jr. questioned whether taxpayer money was going toward the production). 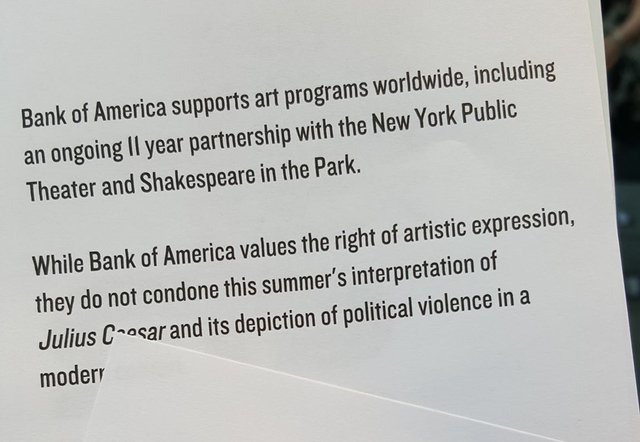 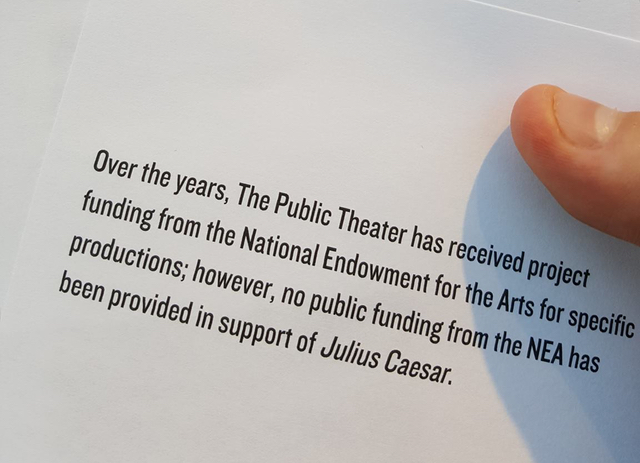 In an interview with the Times published Tuesday morning, the art director noted that he didn't try to talk the sponsors out of their decision, and said he was more interested in those perpetuating the outrage cycle:

I don’t want to criticize anybody except The New York Times. The fact that you guys broke the decades-long precedent on embargoing reviews, in response to what Breitbart had done—because that’s what you did, because Breitbart ran a story, other people picked it up, and you broke your arrangement with us. That’s a perfect example of how we are allowing the right-wing hate machine to change our relationships to each other, and that is bad. You and I, and The New York Times and I, will recover from it, but still I think it’s not what we should be doing.

Despite the swirling controversy—and the backlash to the backlash, and so forth —those in attendance Monday night appeared to enjoy the free show. "The crowd seemed to respond positively," attendee Seth Christenfeld told Gothamist. "Though it was opening night, so they were kinda primed to. Plus, y'know, free booze and desserts afterwards."

By 10 a.m. this morning, a line had already formed at Central Park for tickets to tonight's production.

Update: the line this morning for Julius Caesar. No uproar in sight pic.twitter.com/C2c3dLQjxM

#alec baldwin
#julius caesar
#public theater
#shakespeare in the park
#trump
Do you know the scoop? Comment below or Send us a Tip