PSA: The Hudson Yards 'Vessel' Has The Right To Use All The Photos & Videos You Take Of It Forever

The massive 'Vessel' is the honeycomb-like crown jewel of Hudson Yards, which officially opened on Friday. It's been compared to a giant Shawarma, a comically-oversized pine cone, a rejected M.C. Escher fever dream, and a "$200 million staircase that doesn’t actually take you anywhere." Whether you think it is an out-of-place eye sore or the next great public art installation, there's no doubt that it was purposefully designed to lure in millions of visitors a year and inspire an infinite number of selfies and Instagram photos. But here's something to keep in mind if you do decide to go get that picture: simply by visiting the Vessel, you are granting the Vessel the rights to use all of your Vessel content.

In the Hudson Yards Terms & Conditions, which you very likely have not read closely, there are two notable and exceptional clauses which state that by creating, posting or uploading any content depicting or related to Vessel, they have the right and license to use your content however they see fit in perpetuity. Likewise, if you merely appear in a photo with the Vessel, they also have the right to use your name, likeness, voice, and all the rest for any commercial purpose they see fit in perpetuity.

MY NAME AND LIKENESS. If I appear in, create, upload, post, or send any photographs, audio recordings, or video footage depicting or relating to the Vessel, I grant to Company the unrestricted, worldwide, royalty-free, perpetual right and license (with the right to transfer or sublicense) to use my name, likeness, voice, and all other aspects of my persona for the purpose of operating, developing, providing, promoting, advertising, and improving the Vessel or any other products or services provided by Company or its sublicensees (in either case, now known or later developed). I understand I will not be entitled to any compensation from the Company, its affiliates, or its business partners if my name, likeness, or voice is used in the Vessel’s marketing and promotions, whether on Company’s website, social media channels, or otherwise.

MY CONTENT. If I create, upload, post or send any photographs, audio recordings, or video footage depicting or relating to the Vessel, I grant to Company and its affiliates the irrevocable, unrestricted, worldwide, perpetual, royalty-free, sublicensable, and transferable right and license to use, display, reproduce, perform, modify, transmit, publish, and distribute such photographs, audio recordings, or video footage for any purpose whatsoever in any and all media (in either case, now known or developed later). I further authorize Company to store such images on a database and transfer such images to third parties in conjunction with security and marketing procedures undertaken by the Vessel. Such usage and storage shall be in line with the Privacy Policy at all times. I will not exploit any photographs, audio recordings, or video footage of the Vessel for any commercial purpose without Company’s prior written consent.

"Pretty much the only thing they didn't ask for was the copyright to the material. But you're pretty much granting them an extremely broad license, and it's unfortunate but we're seeing these kinds of overreaching rights grabs come up all the time," Mickey H. Osterreicher, General Counsel for the National Press Photographers Association (NPPA), told Gothamist. He clarified that the Vessel doesn't own your content, but they are allowing themselves broad license to do whatever they want with it commercially without your specific consent—and you aren't allowed to use it commercially.

"It's one thing when you go to the theater, they say there's no photography allowed. But to allow you to take pictures but then say that you can't use them commercially, which is understandable, but to say you are granting them a license to use commercially, that's quite an overreach," Osterreicher said. 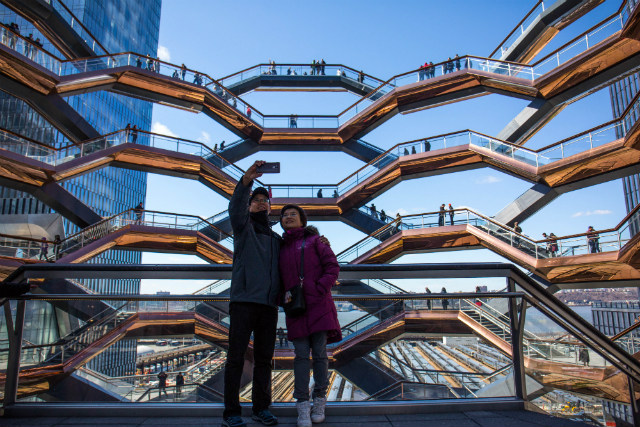 Osterreicher explained that these sorts of photo rights grabs are becoming more and more common in the social media age. And it has created an inverse of the typical legal burden: "Normally, if you took a picture and you didn't post it anywhere and they wanted to get those images from you, the burden would be on them to find those images and get them. But because so many share things on social media, this pretty much gives them the right to say that if they see an image, they can take it and use it in any way they see fit, and then it would be your burden to go after them and say, 'Hey wait a minute, you used my imagine without credit, compensation or permission.' And they'll come back and say, 'Oh but you did give us permission. Not only permission to use your imagine, but you gave us permission to use your name and likeness.'"

And it's not just private citizens who are affected by this: outlets like Gothamist or the New York Times could also, in theory, see their photos and videos and drone footage re-used in Vessel publicity campaigns in the future.

Osterreicher connected these kinds of power moves with more general issues that are hurting the professional photography industry at large: "It's a very difficult time, photography has just become so ubiquitous," he said. "The fact that everybody has a cell phone, every cell phone has a camera, and everybody's taking pictures, hundreds of millions of images are uploaded every day. And it's really devalued photography to the point that we're seeing things like this, where people think they can get away with a rights grab like this. Until there's some pushback, until there's some negative publicity, until it's more detrimental to them than not, organizations will continue to do this."

Cornell Tech and Cornell Law School professor James Grimmelmann offered a few thoughts on what he described as a "badly drafted clause" on Twitter:

It also applies to "audio recordings"(!) again regardless of where they were recorded. So if you go into the Vessel and then make a podcast about your visit, they claim a right in that too. 3/

But because they only take a personal promise not to make commercial uses, they have no recourse if *someone else* makes a commercial use of your media. 5/

It's always amusing to see a clause this overreaching and also this badly drafted, like watching the mustache-twirling villain slip on the banana peel he dropped and fall face-first into a giant cake. 7/7

We've reached out to Vessel representatives to ask about how the policy was decided upon, and how it might be implemented in the future. In the meantime, I hope this rat realizes that he could very well be the face of the next Vessel ad campaign.

Hudson Yards has blended seamlessly into the city: pic.twitter.com/KhD9zHaKCd

Update: A representative for the Vessel told Gothamist, "The intent of the policy is to allow Hudson Yards to amplify and re-share photos already shared on individual social channels through our website and social channels. This is a practice utilized at nearly all major attractions and we wanted to over communicate, be transparent and disclose to all users. We are refining the language to be more clear."

#hudson yards
#photography
#the vessel
#vessel
#original
Do you know the scoop? Comment below or Send us a Tip