The only real Banksy stencil stand, 2013.

Every couple of months we receive an email declaring that "Banksy is back," which is either stated as fact in the subject line or posed as a question. Banksy is back? What these suckers are asking is if they should purchase a stencil from someone who has set up a stand on the street, just like Banksy did that one time in 2013.

Banksy's stand was set up around Central Park for a few hours as part of his month-long residency here—no one knew it was his latest installment, but three people were into the stencils enough that they shelled out $60 a pop. One expert later priced each one closer to $95,000.

Naturally, the city's entrepreneurs began popping up with their own stands selling very similar, almost identical, stencils, hoping to make a quick buck. This is still happening three years later. 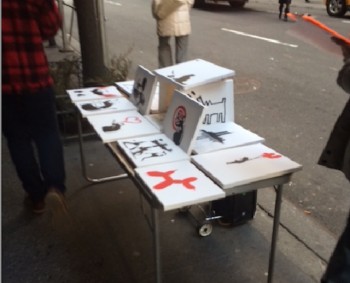 Banksy AND Keith Haring stencils at one stand? SCORE.

So: did you just pass by a Banksy-looking stencil stand? Are you about to email us asking if you should buy the Banksy-looking stencil? I don't know, should you buy that "Armani" jacket? Not if you are looking for authenticity. But if you actually like the stencil, or the jacket, why not? Even Andy Warhol originals were really Styria Studios Inc. originals. How many degrees of separation in outsourcing an artist's work makes it no longer real?

And is the stencil not real no matter who created it? Can you not hold it in your hands, gaze at it, hang it on your wall? Are you only in this life for the money? Maybe you should take your $60 and buy a mirror, and have a nice long look.

The latest inquiry about one of these stands came from "anonymous" yesterday, who wrote: "Just spotted guy selling Banksy paintings near corner of 7th & 41st Street. See photos attached. Airbrush paintings are on canvas with wood frames. Price: $60 each for any size. He had limited selection, seems to be going pretty fast this time. Fake or real?"

"But maybe this time it's real... just another one of Banksy's games," anonymous replied. "It's 'always fake' until it's not. Fucked up."

Yes, just like four hour lines for milkshakes, crunning, and President Trump, it is indeed "fucked up." How WILL we ever know the difference between what is real and what is real-but-not-of-monetary-value?

We reached out to Banksy's publicist, Jo Brooks, to get a definitive answer to this question: "Will Banksy ever set up a stencil stand in New York City again?"

Brooks has yet to answer, so we may never know.

#art
#banksy
#scam
#stencils
#original
Do you know the scoop? Comment below or Send us a Tip