Photos via the Smoking Gun 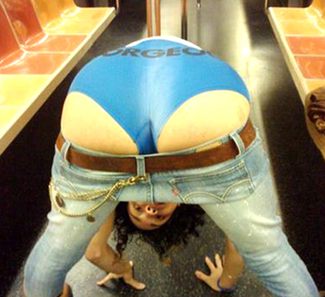 Earlier today news broke that 24-year-old New York City man Cecil Singleton has filed a lawsuit against Elmo voice actor/puppeteer Kevin Clash, alleging that the Sesame Street employee engaged in underage sexual contact with him when Singleton was 15 years old. At a press conference this afternoon, Singleton went into details, claiming "that while they never had sexual intercourse [until he was of age], the two did engage in several sexual activities together ... including 'groping, masturbation, intense kissing, dry-humping.'" Meanwhile, The Smoking Gun has already dug up information and very provocative photos of Singleton, who is seeking more than $5 million. They note that Singleton "lives in Harlem and describes himself as a 'complex and different individual' who prides himself on being 'subversive and original.'"

Singleton's attorney, Jeff Herman, actually wrote about Clash's first accuser, Sheldon Stephens on his blog last week, stating, "Whether Clash is guilty or not, the allegation that a 52-year-old man had sex with a minor is an allegation of child sexual abuse—not an underage relationship." When Herman first filed Singleton's lawsuit this morning, there was at least one mistake—TSG notes that "it asserted that Singleton began having sex with Clash in 1993 (when the accuser would have been five). An amended copy of the complaint noted that Singleton was born in 1988 and that the alleged sexual activity with Clash commenced around 2003."

Singleton is Clash's 2nd accuser to come out in the past week, and says he only just realized that he has suffered “adverse psychological and emotional effects” from the relationship the two had. As for his 1st accuser, Stephens ended up settling for $125,000, but yesterday announced he wanted to undo his settlement, and was seeking a new lawyer.

After today's news broke, Clash resigned from Sesame Street, saying that “personal matters have diverted attention away from the important work Sesame Street is doing and I cannot allow it to go on any longer.”

#cecil singleton
#elmo
#jeff herman
#kevin clash
#sesame
Do you know the scoop? Comment below or Send us a Tip
A new Gothamist is coming! We’ve moved comments over to our beta site. Click here to join the conversation and get a preview of our new website.