Last week we got a look at what the Empire Stores Warehouses may look like in the future, and now the proposed new look of their neighbor, The Tobacco Warehouse has been revealed.

Community groups, preservationists, and the city have begun to finalize the plan for the building in Brooklyn Bridge Park, which was granted to St. Ann's Warehouse last year and will become the theater's future home. The architects at Rogers Marvel Architects are heading up the project, and presented these designs for the structure, which is now an abandoned open-air space that is gorgeous just the way it is. 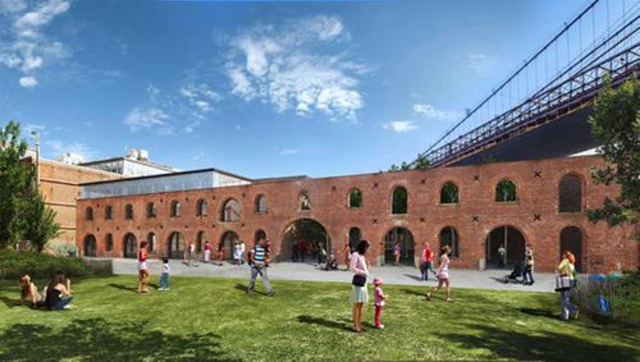 According to Curbed, their plan "would enclose the 18,000-square-foot enclosed building with 'a flexible performance space,' plus another 1,000-square-foot multi-use space for local artists and community groups. The lobby will have access to Brooklyn Bridge Park, and the plan also includes a 'view corridor' looking out at the park and the water." But some of the space will stay open—a 7,600-square-foot triangular open space "imagined as a walled birch tree grove" will double as an entrance to the theater, and be open during park hours even when the theater is not. This portion of the plan was designed by Michael Van Valkenberg Associates, who have also worked on various sections of Brooklyn Bridge Park.

#brooklyn bridge park
#dumbo
#renderings
#tobacco warehouse
Do you know the scoop? Comment below or Send us a Tip