Prom Night for the Privileged 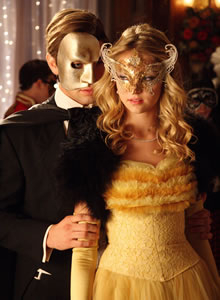 Life imitates Gossip Girl tonight as the teens from six of the city's most elite private schools join together for a prom in the Waldorf's Starlight Roof (the Waldorf ballroom is where public high school Stuyvesant's prom will be this Friday -- ground floor for the plebes!).

The NY Sun reports on the gala event, which will bring together a privileged pack from Collegiate, Browning, Brearley, Hewitt, Spence, and Nightingale-Bamford schools. Dinner, dancing and silver-plated service will all prequel the main event: the after parties.

People at the Upper East Side school Dalton are planning such a party, complete with a legal waiver parents must sign promising not to sue the hosts should something happen to their children. The after-party is so popular that it has a waiting list, filled with the names of about half the members of the senior class, a source said.

Apparently, the exclusive no-fee parties are a far cry from other teens will be doing after their big dances; "prom experts" (really!) report that teens "particularly those in boroughs other than Manhattan" usually end their special night paying to get into a club, heading to the NJ shore or having breakfast at a diner. What about the rich kids whose parents are crying poor, though?

Fear not, Brooklyn: The Grand Prospect Hall in Brooklyn hosts prom-goers from Brooklyn Heights' Packer-Collegiate School with red carpets. But whether you're Blair Waldorf or what's-her-name from the wrong side of the bridge, you'll probably have your night soundtracked by Taylor Swift.