The photographer Lee Friedlander once said in an interview, “Anything that looks like an idea is probably just something that has accumulated, like dust.” He added, “The pictures make me realize that I am interested in something.”

Over the decades, the accumulated interests of this seminal and prolific photographer have spanned the gamut of the social landscape. They have included busy streetscapes, storefront reflections, 1960s TV sets, the Civil Rights movement, his wife and children, chain-link fences, and New Yorkers talking on cellphones.

As Friedlander fans well know, one of his recurring visual themes has been that of signs — ads, posters, road signs, movie marquees, graffiti — all of the pervasive messaging that envelopes modern life. At 84, he has come out with a new book called Lee Friedlander: Signs, a compilation of 144 photographs published by the Fraenkel Gallery in San Francisco. Made in New York and other places across the country, the work includes photos from past series including “The American Monument” and “America by Car.”

As an artist, Friedlander is known for his ability to organize visual chaos and capture an arresting and often witty image that makes meaning out of the mundane. But for New Yorkers accustomed to sensory overload, the black and white photos of old New York make the city look almost serene by comparison. It's a time trip — painted window signs and hand-written price tags, or a boarded up vacant lot with a jumbled warning of “Post No Bills.” 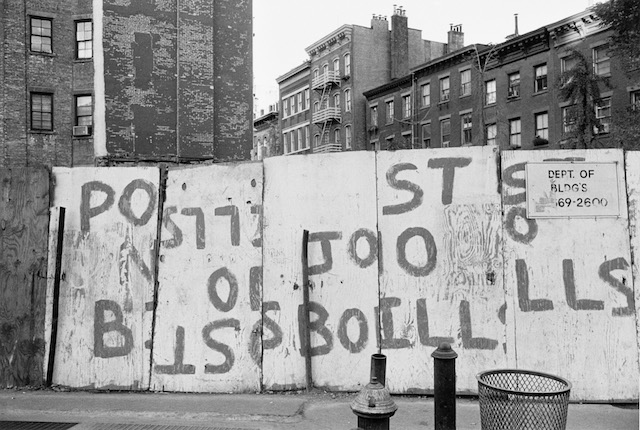 Friedlander has said he has retired from everything but work, so it's possible he's still out there roaming the city streets, capturing the bright cacophony of digital signs.