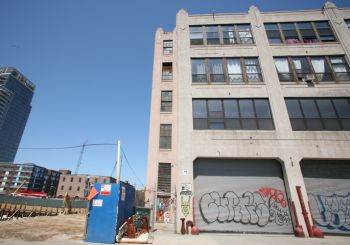 The NY Sun dedicates a whopping 1000+ words to recent Project Runway victor Christian Siriano moving from his tiny East Village apartment all the way across the bridge to Williamsburg.

The Maryland-born Siriano chose the renovated 1,400-square-foot loft in part because of its proximity to the waterfront, but was immediately turned off by the graffiti on the outside of his new residence. Softening the unfabulous urbanity, however, is McCarren Park -- he told The Sun, "There's a great little park around here that's like a mini Central Park. On the weekends it's just full of fabulous-looking people on their fabulous bikes." Siriano isn't a total stranger to the borough, as his Brooklynite boyfriend Brad Walsh has dragged him to the area on a few occasions.

Somewhere amidst the diatribe on Siriano's new digs and all the fierce accoutrements dappled throughout, The Sun makes note of his three new beds: a Ludwig Mies van der Rohe "Barcelona Daybed," a Design Within Reach sofa bed, and a king size given to him by W Hotels. Between designing Whoopi Goldberg's Tony Awards outfit, creating a line of 1920s clothes for an upcoming movie, going to Vegas with Ultragrrrl, and working on a book...it's likely he won't be using them any time soon. Though with America's next top hot fierce designer resting his head in Williamsburg, and with model Agyness Deyn recently moving to the nabe as well -- is it already outgrowing its college campus aesthetic and turning into the next fashion mecca?

Photo of Siriano's loft via the NY Sun.

#Agyness Deyn
#bravo
#christian siriano
#loft
#Project Runway
#real estate
#williamsburg
Do you know the scoop? Comment below or Send us a Tip