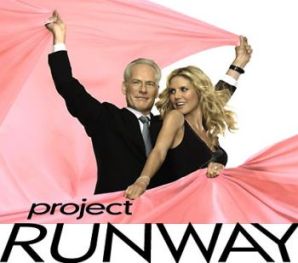 How will Lifetime transition from "woman in distress seeks revenge" movies to "hot tranny mess" is beyond us, but The NY Times reports that NBC Universal, Bravo's parent company, has lost their precious “Project Runway" to the "femme-centric" (per Variety) network.

NBC Universal filed a lawsuit in Manhattan today, accusing the show's owner, the Weinstein Company, of violating rights by pairing up with Lifetime, which offered $150 million. From the Times:

The suit asserts Harvey Weinstein, the chief executive of the Weinstein Company, promised NBC that it would have an opportunity to match any offer to the rights of “Project Runway” and that instead, Mr. Weinstein concluded a deal with Lifetime on Feb. 7, even though he continued to negotiate with NBC Universal for two more months.

In a statement, NBC said “NBC Universal has continuing rights related to ‘Project Runway,’ including a right of first refusal to future cycles of the series, which the Weinstein Company unfortunately has refused to honor.”

Weinstein's lawyer thinks the lawsuit is without merit. Lifetime president Andrea Wong "could not be more excited" the show arriving this November, but seemed confused why Weinstein was continuing to negotiate with NBC when she had a signed contract. As for Bravo, they were going to lose the program anyway, as the NBC contract had an upstream clause which would have landed it on one of their bigger networks.

While the legal battle ensues, Lifetime is crowing about the acquisition. Heidi Klum said, "Fashion is about change, so we’re looking forward to saying hello to Lifetime, our new fashionable home for our fashionable series. We’re excited to bring 'Project Runway' to the #1 network for women." And Tim Gunn said, "Lifetime and I will definitely ‘make it work’ together. I am very excited to be part of the Lifetime family."