Project Runway 4: Clothes and the City 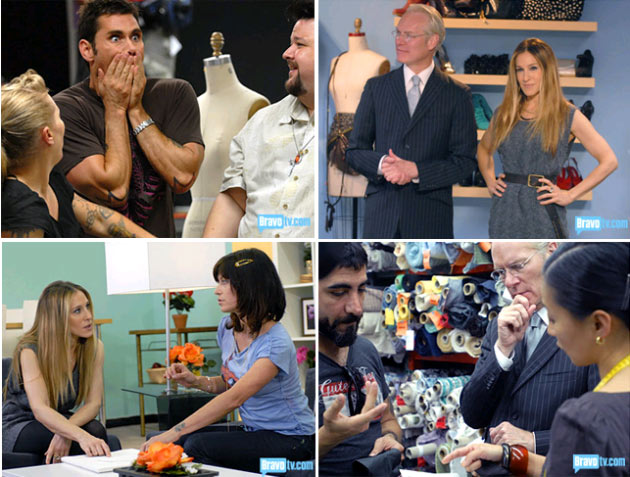 The gasps you heard in front of certain American television sets Wednesday were because Project Runway's second episode packed a wallop. After American icon challenges during season 2 and 3, the fourteen remaining designers speculated this year's fashion icon could be Madonna, Britney ("she needs help," according to the severely coiffed Christian, who interned at Vivienne Westwood and Alexander McQueen) or Snow White, it's possible that the actual icon was better than their dreams: It was Sarah Jessica Parker!

The designers start clapping, gasping in amazing, and, yes, even crying (Chris March, the theatrical costume designer, says he moved to NYC because of Sex and the City!). Tim Gunn even gushed "Bravo! Bravo!" to SJP, who announced the challenge would be for the designers to pitch her on a two-piece design that would be a part of her fashion line Bitten, which is sold at Steve & Barry's. The designers would pitch her their ideas, she would pick seven designs, leaving the designers to chose partners to pair up with. And that's not all - the designs would retail for $40, which means the fabric could not cost more than $15. More gasps!

The teams and their designs (which you can see here) were:

Everyone seemed to work well together - even Elisa and Sweet P turned out to be a good team. Elisa, as space cadet-y as she may seem, was very sweet and seemed responsive to Sweet P's constructive suggestions, like not spitting fabrics to mark them (Elisa said she imbibes fabrics with energy) and not handsewing everything. And Sweet P ended up respecting Elisa's vision, not to mention earned the respect of the other designers to being strong enough to work with Elisa. Tim Gunn, as always, said it best, when he said "you two need each other" during the challenge. 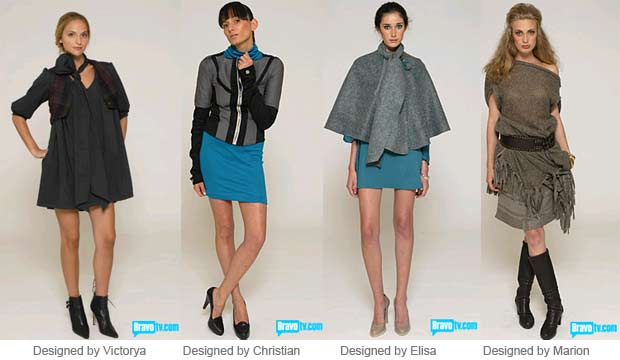 The judges singled out designs from Victorya, Christian, Elisa, and Marion as the best and the worst. Ultimately, they loved Victorya's simplicity and cute vest (with racer back) and Elisa's outfit (Heidi told Elisa not to tell people she spits on their clothes, Elisa said that she is from another planet but comes bearing gifts - aw) - one of the main criteria was that the design would look great on a number of body types.

And the judges hated Marion's "sad" "Pocahontas" outfit and Christian's power 80s Mugler-style outfit (exactly the criticism that Tim Gunn had - lesson to everyone - listen to Tim Gunn! He's there for a reason!). Christian, upon hearing the criticism from Heidi, Nina Garcia, and Michael Kors, got defensive and demanded to know what SJP thought, since he delivered on his sketch; she said that his outfit was much more severe in person than on paper. In the end, the judges awarded Victorya the win and bade Marion auf wiedersehen.

Next week, Michael Kors says that the crotch on a pair of pants is, yes, INSANE! LAist watched the Season 4 premiere of Project Runway with Santino Rice AND Andy Richter; Santino told LAist's Julie Wolfson, "As mystic as Elisa is, I think she is pretty interesting. I wish it didn't come across so new age-y, but I think she is pretty talented. I like where she is coming from. It's refreshing to see somebody approach fashion from an art perspective, versus trying to make clothes that are going to merchandise together and show up in a store."

And fun fact: Did you remember that Project Runway designers, in the season 2 "American style icon" challenge, wondered if SJP might the icon?