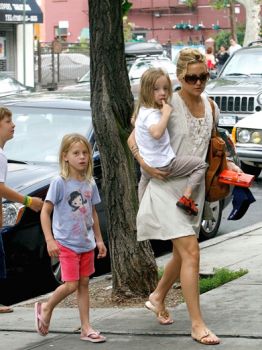 It was a modern Father's Day for some of Kate Hudson's past and present beaus. Yesterday Hudson, her current boyfriend Lance Armstrong, his three children, Hudson's ex-husband Chris Robinson, and their son Ryder all attended a two-hour brunch in Brooklyn together in honor of Father's Day.

People reports that "the couple was spotted splitting into two cabs for the drive from downtown Manhattan – a boy cab and a girl cab." Robinson wasn't left to fend for himself, however, UsMagazine reports that he also brought a girlfriend to the brunch.

The awkward meal was held at Frankie's 457 on Court Street, and Just Jared has some photos of the arrival. Hudson and Armstrong were spotted at Whole Foods on Houston later that night.

Last week Hudson launched her own eco-friendly hair care line (really!) with a celebration at ABC Home & Carpet. Today, Armstrong was on hand for Mayor Bloomberg's announcement about Summer Streets.

As for the Black Crow, his band is hitting the road at the end of the month.