Neutral Hero is unlike most theater you've seen before, unless you've seen Richard Maxwell's theater. His theater company, the NYC Players, are known for a distinctive, minimalist approach to performance—Maxwell's process as a director involves stripping away all extraneous gestures and mannerisms in an attempt to unlock the essence of acting. Neutral Hero, his first new original play to be performed in NYC in several years, tells the simple story of a young man searching for his father in the American landscape. But as always with Maxwell, it's how this simple story is told that most's interesting. Music, dance, and dialogue that approaches poetry intertwine to create a dream-like tone in this strange new work, which the New York Times describes as a "remarkable... juxtaposition of the sublime and the prosaic."

Neutral Hero's final performances in Chelsea were cancelled when The Kitchen, where it's being staged, was flooded with four feet of water during Hurricane Sandy, causing an estimated $500,000 in damage. Those shows have now been rescheduled for November 30th through December 1st. But before the storm was on New Yorkers' radar, we spoke with Maxwell about the play and his process.

You're from the Midwest originally? Yeah.

I didn't really put this together when I saw the play, but I was just reading Ben Brantley's review and he figured out that it takes place in Perham, Minnesota. Yes that's right. I think it's pronounced "Purrrmm"

Have you been there? Oh, yes. Many times.

What significance does that place have for you? I have a peculiar relationship to Perham. I never lived there, but ever since my mom and dad bought property [there]—they bought a farm—I'd go there virtually every year since 1977. You know, I'd go there for a week, or two, every year. I know that town like the back of my hand, so it was a very easy jumping off point for Neutral Hero.

It begins with this very detailed description of the town and the retail establishments in the town. Is all that accurate, and why did you feel like you needed to include all of that? Oh, it's totally accurate of the town. The reason was that I wanted to fix the story in something really specific and actual and it would make the departure from that... You know, it would put that in relief.

Yes, after that come more abstract elements, like the men in the masks and what goes on between them. It was almost like a dream. That was the point actually, I like the movement from the conscious world to the unconscious world.

I think the title is really interesting too. The thing that comes into my head when I hear that is, 'That's impossible, you can't be a hero and be neutral,' it's like Howard Zinn's thing "you can't stand still on a moving train" You're right, you're right, that's impossible. That's how, based on public reaction to my work, it kind of gets painted as that. "The hero of neutrality." Rather than run from that, this time I chose to embrace it. I can't remember whether I intended that from the beginning, but, take Perham, for example. It became my story. If you could fit that story into a hero's paradigm. Like The Odyssey... Then maybe that's what it would look like.

What do you mean, your story? Well, like I said, it's a place I grew up in, a place I know. There is a lot of family stuff, a lot of personal stuff.

Have any of your family members come to see the play? Yeah, my sister Jan, who a lot of theater people know, Jan Maxwell. She was there on Sunday. I couldn't help but feel like I was watching it through her eyes.

And what occurred to you? I was just wondering what she was thinking and feeling. There are just short things, like, a description of a house, a house we both grew up in. No one would know that except she and I... I just had to wonder... It was funny, we had a fact-checking conversation afterwards. Like, did I get it right? She lived there longer than I did.

Is there anyone you think of as a hero? How do you mean?

In the literal sense of real life life heroics? Not literature or drama. Oh... I don't think so. It seems to belong to the mythical realm. I know, if you run inside a burning building and save a child, you're considered a hero, because you've risked your life. But I don't know. I don't know if that's really.... it seems like 9 times out of 10 when people are told they're a hero they demur, they turn away. I think that's because that's not something anyone really wants as a mantle. There's a lot of pressure there, if you say, you know, "Yes, I am a hero." 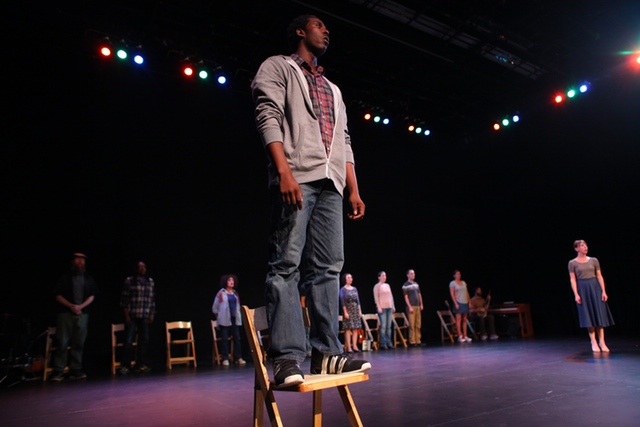 The cast of Neutral Hero, with Anonymous in foreground. (Courtesy of New York City Players)

In your play, the hero doesn't even have a name. He remains anonymous. Well, I guess, it seems to fit with "neutral" with carrying the theme forward with "neutral." There are other names in the play; I don't know if you read the script, there are other characters that have "multi-use names." You know about that?

No. There are these names, "multi-use names", like Luther Blissett, for example. If you look up Luther Blissett, it's a multi-use name, it's a fictional person, in the public domain. I didn't use that one. But there are ones. Rrose Sélavy [Editor's note: This was one of Marcel Duchamp's pseudonyms.] is one, and, I have, Karen Elliott, is another. I had fun taking advantage of the free usage of these names. There's no identity! Just like, this is why we use anonymous, there is NO identity.

I don't understand, so if I'm writing a play... Here, if you go on the internet, and look up multi-use names, there is a list of names, and that are not real people, creating by artists or other people, that people use for their own purposes. Reena Spaulings' gallery is one example I know of in New York, that's not a real person, but..

And you've been performing this in Europe. Do you feel that people in Europe are more receptive? No! I think it's the opposite. We don't have that much experience performing it in America—four shows is all—but I can tell already that there is more immediate back-and-forth with the audience. There is just something about the writing that is just hopelessly American. In terms of the technical jokes and references, people in Europe don't get that really. And you have to think that the European audiences are mostly reading surtitling. So someone told me that watching the play was like reading a book, and I liked that and then I thought it must definitely be like that for audiences that are reading the surtitles.

Do you go to see every performance? I try to, yeah. I am a little superstitious, and I feel like whenever I don't something bad happens! I'm obliged to go.

Has that happened with this performance? Maybe not with this show, not so much. But in past shows, yeah. Like in stage combat once, somebody got kicked in the groin accidentally. Stuff like that, when I wasn't there. And good stuff happens too! David Byrne came to a show—actually two shows—and I wasn't there each time.

And here's a question I'm sure if you've heard a million times. You're known for using actors with very little or no professional experience. Why is that important to you? I guess there are people in this production that would not necessarily call themselves actors, and there are also some people that do, in this production. The main reason, I think, for that is that there's no right way to perform, for me. I'm really interested in the way people think. And the way people approach performing is really interesting to me and that can happen with somebody who has a lot of experience or with someone who has no experience.

Ideally what ends up happening is that there is more community up there on stage. It's not so much about being convincing; that doesn't really interest me. It's really about making a more immediate situation for the audience that allows for the unexpected to happen. I think when you combine people that have a lot of experience and people that have no experience, what you're really saying is that it really opens up the playing field for what can happen.

Do you feel like where/what the production is now is fulfilling your expectation of what you wanted to express? Yeah, I do actually. I feel pretty satisfied. It was a lot of work. We started this show a year and a half ago and we started performing in Bruxelles with the Kunsten festival and we went to, I think it's been 11 cities since then. It was kind of tough in Bruxelles; people were walking out, people were pissed off—I'm talking about the audience. This wasn't the majority but it was really tough on the performers. I remember telling them, "Look I don't care if people walk out, as long as we're making clear statements." So that's what we've been working on since we started performing, to refine and explore what that means.

I imagine it must be exciting. I remember reading about Wallace Shawn's first plays at the Public Theater, and the audience reaction would be so volatile. There was one account of a guy who started walking out but ended up just pacing back and forth at the back of the room during the performance. In a way, that may be more satisfying for a playwright than a bunch of people that just sit there like sheep and stumble out at the end silently. Yeah, and I feel lucky actually to have the group that I have working on my show. A lot of these people are friends of mine. I know a lot of people not from the theater world, but through life. Like, I used to work at this cafe on 43rd Street, and at least two of the people are from that world. And there's that, and what I've written about my life, it just makes this a real personal thing for me.

#interviews
#neutral hero
#richard maxwell
#the kitchen
#theater
#original
Do you know the scoop? Comment below or Send us a Tip