Only 55 miles away from NYC in the town of Mahopac there's a 10-acre, heart-shaped island featuring one Frank Lloyd Wright cottage, and a main house based on the architect's designs. Some say the final product is similar to Wright's cantilevered Fallingwater home, and allegedly Wright himself declared that the Petre Island home would surpass his iconic Pennsylvania property. Wright never got to build the main home—it was Joseph Massaro, the current owner, who saw it through in 1997; Wright did build a guest house on the island, however, which still stands today.

According to Town & Country, the main house was based on the original designs Wright drew up for the island. They explain:

Back in 1950, the illustrious architect was commissioned by an engineer named Ahmed Chahroudi to build "a masterpiece" on the island he owned at the time, according to the Guardian. At a lunch with Chahroudi and Fallingwater's owner, Edgar Kaufmann, Wright even said, "When I finish the house on the island, it will surpass your Fallingwater."

As it turned out, Chahroudi never got his house—he realized he couldn't afford it, so Wright created a small cottage island for him on the island instead. Following a conflict with the Frank Lloyd Wright Foundation, which declined to certify the house as one of Wright's, Massaro had it built based on the architect's drawings that came with the island.

The property is now on the market, with an asking price of $14.92 million. The Wall Street Journal notes that it comes with the Wright-designed guest house (a "low-slung, 1,339-square-foot cottage with a peaked wooden roof"), a man-made pond, a hilltop forest, and a rooftop helicopter... along with all that land, privacy, and the main home.

Check out photos above, and the full listing here. And yeah, it's heart-shaped: 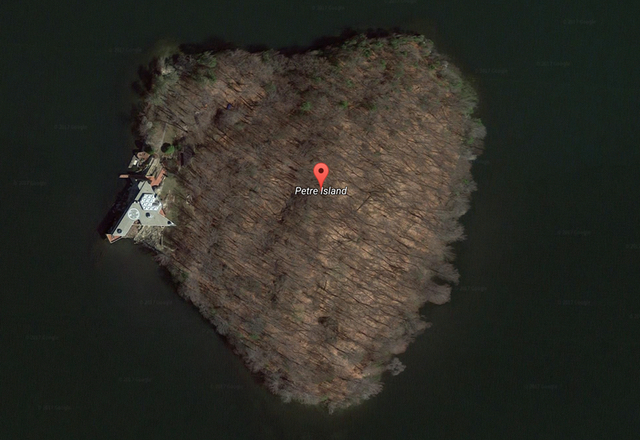