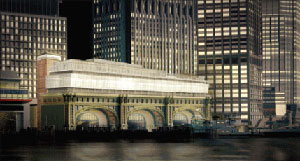 This week, reports the Downtown Express, the Landmarks Preservation Commission recommended that architects incorporate elements of the Battery Maritime Building's original architecture into a proposed plan to renovate and expand the ferry terminal. The Dermot Company seeks to develop a glass boutique hotel (complete with roof lounge) and specialty foods marketplace above the Beaux Arts ferry terminal.

The changes at the Battery Maritime Building gives us an inside look at the politics of historic preservation, with leading institutions disagreeing over Roger Marvel Architects' proposed plan (rendering above) for the recently restored building. The Landmarks Preservation Commission, according to the Express, was "generally receptive to the plan." The American Institute of Architects supported it completely. The Historic Districts Council was against the notion of adding anything to the building and both the New York Landmarks Conservancy and Municipal Art Society support a redesign. Hence, LPC's non-vote.

“The building feels segmented,” said Pablo E. Vengoechea, the commission’s vice chairperson. “It feels like there is something happening at the bottom and something else happening on top.”

The comments almost remind us - minus the hoopla - of the criticisms leveled against 980 Madison Ave., Aby Rosen's and Norman Foster's proposed glass and steel tower atop the Parke-Bernet Gallery Building. The project never saw the light of day, thanks in part to objections by an increasingly vocal group of young preservationists, boosted in part by novelist Tom Wolfe.

The city spent $60 million to restore the exterior of the Maritime Building, which was used as a terminal for the Governors Island ferry. The project, completed in 2006, won a MASterwork Award in 2007. Dermot's Peter Poulakakos said the building will be the "crown jewel of downtown."

The Battery has been a "civic space" since 1626, according to MAS. As for the terminal building, there seems to be some confusion regarding the date the building was completed. The AIA Guide reports 1906. MAS has it at 1908. And the Express says it was finished in 1909. At least one thing is clear: 21st century preservationism and its arcane ways continue to baffle us.