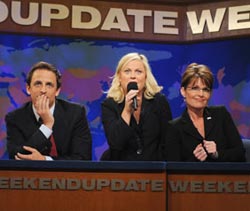 After weeks of speculation and buildup, Sarah Palin finally appeared on Saturday Night Live last night, playing herself in two separate bits on the show. Despite the star power of the cold opening that on top of Palin and Tina Fey featured appearances from Mark Wahlberg and Alec Baldwin, the sketch fell a little flat when compared to the instant classics that Fey has been cranking out all fall.

But SNL wasn't done with Palin there. To close out Weekend Update, she made a second appearance, but quickly told Update's Seth Meyers that she "couldn't go through with" the planned sketch because it wouldn't be good for the campaign. That left Amy Poehler to "fill in" and give a showstopping performance, rapping as a gangsta version of the governor while Palin raised the roof in the wings. Chris Parnell must have left some hip-hop fairy dust in the Update desk because Poehler really knocked it out of the park--watch below.

Elsewhere on the show, Josh Brolin held his own as host in an episode that saw not one, but two mentions of his work in The Goonies. One of those came from Mark Wahlberg, who would also make a second appearance on the show, essentially replaying the "Mark Wahlberg Talks to Animals" sketch from the previous episode while confronting Andy Samberg about it. And it wouldn't be an election year without an appearance from Will Forte's longtime character, the always deliberate Senator Tim Calhoun. (Both clips, along with the opening, are after the jump.)

As for Poehler, following this Thursday's final primetime special, she only has two more episodes remaining before she leaves the show--her final one being November 1st. She will certainly be missed.

#alec baldwin
#amy poehler
#andy samberg
#chris parnell
#josh brolin
#mark wahlberg
#sarah palin
#saturday night live
#senator tim calhoun
#snl
#tina fey
#will forte
Do you know the scoop? Comment below or Send us a Tip
A new Gothamist is coming! We’ve moved comments over to our beta site. Click here to join the conversation and get a preview of our new website.