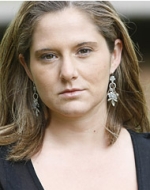 Her real (white) sister called the publisher Riverhead Books after reading a lengthy NY Times feature about Jones/Seltzer last week (it even had an endearing slideshow!). Today, Riverhead's publisher and editor spoke to the Times. Publisher Geoffrey Kloske noted Seltzer had gone to "extraordinary lengths" to keep up the charade, like people posing as her foster siblings. (And claiming to have founded a possible fake foundation?).

Seltzer's editor Sarah McGrath said, "In the post-James Frey world, we all are more careful. I had numerous conversations with her about the need to be honest and the need to stick to the facts.” The Times also interviewed its own freelance reporter and House & Home editor who are now regretful and wish they did more fact-checking. Even after James Frey (pictured, with Oprah) and J.T. Leory/Laura Albert, those in the publishing industry think things will continue on as is, because, as publisher Nan Talese says, "The author-editor relationship is so much one of trust and I don't think that can change."

Galleycat though, think it's okay to question a non-fiction author: "If you're insulted that somebody's holding your nonfiction writing up to a simple standard of truth, you're probably not ready to share that writing with anybody, let alone an editor."