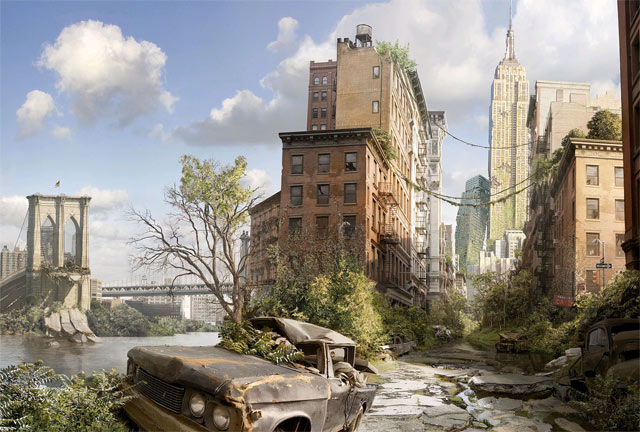 Back in June, we looked at a fascinating article from Scientific American titled "An Earth Without People." The article was based on the premises of a book by Alan Weisman called "The World Without Us." Both focus on what would happen to the earth if humans vanished from the planet immediately. The SA article even has some cool animation of what would happen to NYC here. This obviously inspired other artistic renderings of what a post-human world would have in store for the city, like the one above.

Instead of contemplating a city landscape altered, however, the picture above leaves us contemplating a landscape completely unrecognizable. With the Brooklyn Bridge closer to the point of view than the Manhattan Bridge, we'll assume that we're looking north and standing on the Brooklyn side of the East River. We're at a loss to explain how the Empire State Building moved from Manhattan to downtown Brooklyn. Closer in the foreground is the venerable SoHo bar/restaurant Fanelli Cafe. Perhaps rents got so high Manhattan that even Fanelli Cafe had to move to Brooklyn. One thing we love about this picture, however, is that even as skyscrapers topple, streets rupture, bridges crumble, and nature reclaims our great Gotham, all the fire escapes seem to be perfectly solid and up to code.

Can you find anything odd or out of place in the above picture? A larger version is available here for closer examination.