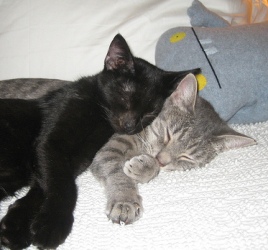 The Mayor's Alliance for NYC's Animals thinks the Port Authority is a liar when it comes to how the agency will handle the the tens to possibly hundreds of cats it hopes to trap from the grounds of JFK Airport.

The Port Authority ramped up its cat trapping efforts, claiming that cats were a danger to air safety and passengers, since leftover food (much of it given by airport and airline workers) would attract rodents and, more worrisomely, birds, to the grounds. The Post reports people who called the PA to complain (most - if not all - JFK cats are feral, which would make them unadoptable and likely to be euthanized) have been told the cats will be adopted out.

The Mayor's Alliance's Jane Hoffman accused the agency of "lying to the public by saying these animals will somehow be miraculously adopted." Even the city's Animal Care and Control, which would be probably be where the cats go, says the cats will probably be euthanized: "We don't have the resources to rehabilitate them, even if they are rehabilitatable." Still, the Port Authority's spokesman Pasquale DiFulco said, "They will be in a safe place until they can be turned over to the proper authorities." Hmm, can they turn Terminal 5 into a huge cat colony?

Disclosure: Our two cats were taken in by a rescue group. The black kitten was in a feral cat colony on Madison and 115th, the grey tabby was four days old and about to be euthanized at a shelter when rescued. Learn more about the NYC Feral Cat Council's efforts to Trap-Neuter-Return cats and you can donate to support those programs as well as shelters in general via the Mayor's Alliance for NYC's Animals. And many shelters accept donations of blankets and towels, even newspapers.