There was some confusion earlier this week when Goldstein's friend, Penn Jillette from Penn & Teller (who paid for Goldstein's old Staten Island apartment), Tweeted that he was visiting him "as he dies in the hospital":

I'm in NYC. Today I visited my hero and friend Al Goldstein as he dies in the hospital, and tomorrow night I celebrate Lou Reed's Life. NYC

He later explained that Goldstein had not yet passed, but was not doing well:

My buddy and hero, Al Goldstein is NOT dead. He is unresponsive and not doing well, but he is alive. Try to stop the rumors. Thanks.

When his magazine debuted in 1968, the manifesto was unyielding—it read, in part: “We promise never to ink out a pubic hair or chalk out an organ. We will apologize for nothing. We will uncover the entire world of sex. We will be the Consumer Reports of sex.” 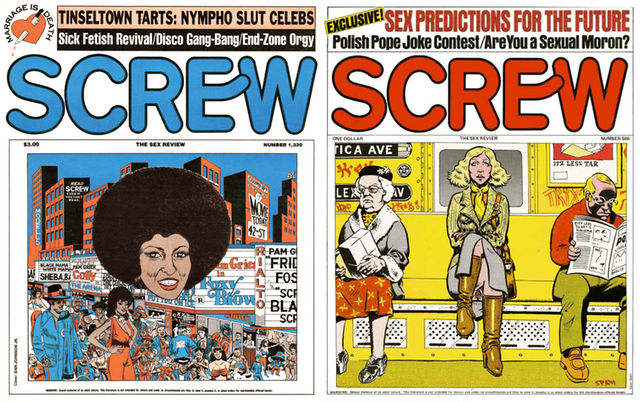 But Goldstein had quite a life even before his dirty mag days: "Before founding Screw, Goldstein was a radio car driver for Walter Winchell, a photographer for the Fair Play for Cuba Committee (he was once jailed in Havana), a press photographer for Pakistan International Airlines (he accompanied Jackie Kennedy on her goodwill tour of Pakistan in 1962), and an industrial spy for a large corporation." He also turned up on New York's public access channels, later in life:

His life was filled with many ups and downs and twisted turns, enough for a book, and at different points he found himself living on a floor in Queens, a VA hospital, Rikers, a townhouse on East 61st Street, Florida (where a lawn statue was in the shape of a middle finger), the aforementioned Staten Island apartment, and a nursing home in Cobble Hill.

For more on his life, there's this 2011 Observer profile, and a lengthy obit from the NY Times.