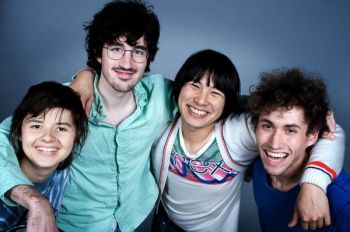 Channeling Yoko Ono's yelps of yesteryear, Ponytail's Molly Siegel leads the band into a frenzied sonic psychedlia. In their glowing review of their album, Ice Cream Spiritual, Pitchfork noted: "It's hard to know how Siegel's approach might work if she were in another kind of band, but in Ponytail her voice fits perfectly." The band has thrived in the DIY scene in New York, but their roots lay in Baltimore. They took a few moments to answer our questions this week, prior to playing a few shows here (the next is today at The Yard). Give a listen and get their schedule here.

You're often playing in New York, but you're from Baltimore -- what's the music scene like in MD? It's original!

Do you feel more comfortable with the Todd P scene in NYC than there? No. We love New York & Todd is a sweet, tender man, but our home is Baltimore.

What's the worst gig you've ever played/why? We played at 4:30AM in Athens, GA which was bogus. White Mice went on as the sun was coming up! We played to a completely empty room in Boise with the Death Set. But we can laugh about it now! Neither of those are our worst gig ever - we don't think like that!

You recently received a glowing 8.4 review on Pitchfork for your album, has it been all downhill from there?! No, not at all. We have so much work ahead of us! We're going to be driving over many hills on tour. Up and then down.

Have you been approached to license your music for advertising? Is it something you are open to? We haven't, but we would have to think about it... kinda depends on what's being advertised. You know?

What bands are you influenced by? Fleetwood Mac

Please share your strangest "only in New York" story. Once we went to a party at a penthouse. They brought out a baby pool full of oatmeal and two ripped guys dressed up like Hillary Clinton and George Bush started wrestling. Then a guy dressed up like Dick Cheney pretended to "shoot" them. Later, two girls on stilts with flaming batons came into the apartment. They blew fire balls on the roof. It was insane!

Which New Yorker do you most admire? Ira Wolf Tuton [Yeasayer]

Best cheap eat in the city in NYC. Maybe "Oasis" in Williamsburg.

#band
#interview
#Music
#ponytail
Do you know the scoop? Send us a Tip
A new Gothamist is coming! We’ve moved comments over to our beta site. Click here to join the conversation and get a preview of our new website.