Play A Musical House In Coney Island This Weekend This weekend in Coney Island, you can play a house. Not play in one—actually play the house itself.

Porch Life is a mobile music box, a traveling piece of interactive architecture embedded with a dozen different instruments: a porch swing metronome, harp banisters, chime and reverb balustrades, triggered steps, marimba railings, an electric curtain. Anyone can come in and start poking around, contributing to a constant, collaborative cacophony. There will also be performances throughout the weekend by Brooklyn Raga Massive, January Hunt, Deradoorian, and Greg Fox, most of whom have never even seen the musical house before. “We’ll give them a crash course in how this all works,” says Jay Pennington, one of the project’s creators. “But they will basically just have to figure it out.”

Porch Life is the traveling outpost of New Orleans’ Music Box Village, a gathering of 13 musical houses made by the nonprofit New Orleans Airlift that has been dazzling visitors since 2016, and has also hosted an incredible array of performers, including Solange, Wilco, Thurston Moore, Tank and the Bangas, Animal Collective, Peaches, and Lost Bayou Ramblers.

“This project really has its roots in New Orleans street culture,” says Delaney Martin, who co-founded New Orleans Airlift and the Music Box Village with Pennington. “There’s a blurry line between your home and a performance space here, from parades going down streets to the jazz singer next door singing through their thin walls. The whole thing is about the spirit of collaboration, about creating harmony—literally.” 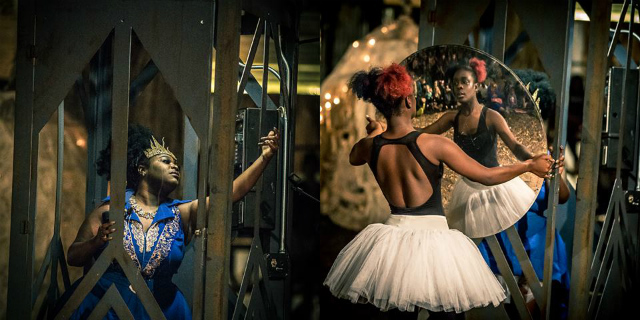 Designed to be mobile, Porch Life was constructed on top of a trailer and collapses to about 13 by 8 feet. When set up, it becomes twice as big: a three-story structure that engulfs the trailer it’s built on. “It unfolds by all these hinges, as if by magic,” Martin says. “Well, ‘magic’ that takes about four hours.”

The Music Box Village is an encapsulation of New Orleans Airlift’s mission of creating cross-cultural collaborative work. “We take artists from different scenes and help them see eye to eye and make art together, but always with a New Orleans lens,” Pennington says. Before it became a village, the first Music Box (then called Shantytown Laboratory) was built from an old tumbledown Creole cottage Pennington owned. For a year and a half, dozens of makers contributed to its creation, including street artist Swoon and electronic musician Quintron. “When we opened it up to the public, we thought maybe 100 people would come,” says Pennington. “Five thousand showed up for the first performance.”

“We knew we had a collaborative juggernaut on our hands,” Martin says. “It’s turned out to be this multilayered, endlessly iterative project.” There are now Music Box outposts permanently installed across the country, from Shreveport, Louisiana, to North Adams, Massachusetts. This is Porch Life’s first tour, made possible with help from Kickstarter and the Creative Independent. It began at the Eaux Claires Festival in Wisconsin, then popped up at the African Bead Museum in Detroit; after Coney Island, it will go to the Kennedy Center in Washington, DC.

Once back home, Martin and Pennington plan to keep Porch Life mobile, traveling with it around Louisiana and within New Orleans. “Wherever we go, I want to provide something that’s magical and wonderous right in the middle of people’s lives,” Pennington says. “The dream for me is that people take a look at it, wonder what the fuck it is, and [stop] long enough to have a moment of engagement, to listen to a bunch of people who don’t know each other making sometimes bad, but sometimes amazing music together.”

Porch Life will be at 12 West Street and the Coney Island Boardwalk on August 4th and 5th from 12 p.m. to 8 p.m., with performances throughout both days. Admission is free but there is a $10 suggested donation to support the tour.

#coney island
#music box village
#porch life
#original
Do you know the scoop? Comment below or Send us a Tip