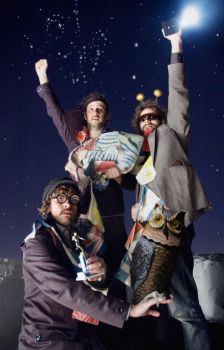 Tonight Plants and Animals open up Central Park's SummerStage show, warming the crowd for both Yeasayer and headliners The National. The Canadian trio has had the honors of doing the same for both Wolf Parade and Gnarls Barkley, something not many bands can put on their resume. Appealing to a wide range of artists while simultaneously being pigeon-holed as having "jam band" influences is no easy feat, and it certainly speaks volumes about the band's versatility. But ultimately their sound is less "jammy" and more of a hybrid of folk-pop-classic rock punctuated by irresistible hooks; get to the Playfield early tonight (6:30 p.m.) for their set and you won't be disappointed.
Photo by Caroline Desilets.

Where did your band name originate? It was created in seven days.

The Arcade Fire's Sarah Neufeld chimes in on violin on your new album; is the Montreal music scene fairly tight? We all went to music school together, so we've known Sarah for a while - at least before any band we're in came about. But yes, the Montreal music scene can be pretty tight. In the neighborhood we live in, which is where a lot of music comes from, it feels like there's only one or two degrees of separation. People know each other, and there's lots of chiming in on each other's projects. But there's also lots of different kinds of music, so I'd say it's more like several tight scenes than one big one.

That latest album is called Parc Avenue, is this a nod to NYC's Park Avenue; how did you come up with the name? It's more of a nod to our own Parc Avenue. The "c" is French. Two of us live on Parc, we recorded a lot of the record on Parc, and it's the spine that runs through our neighborhood. It's a weird, crooked spine, full of odd characters, very up, down and all over the place. After we finished the record, someone came up with the idea of naming it Parc Avenue it it just fit.

You recorded Parc Avenue to analog tape; can you explain this decision and why (to the less studio-savvy) it's different? It's something like comparing CDs to vinyl. There's a certain warmth and roundness to analogue sound quality that can get lost in the digital world. It also meant that we had 24 tracks to work with as opposed to the seemingly infinite amount you can put on a computer. I think those limits helped us in the end. And we just like big machines.

When you opened for Wolf Parade, many audience members said you may have out-shined the headliner; New York audiences don't always tend to show their love -- do you generally get a positive reaction at your shows? [After that show] we played at the Mercury Lounge during the Super Bowl, when New York was in the Super Bowl, and just at the time when they got the ball and there were two minutes left in the game. So the Giants got all the reaction that night.

Are you tiring of the "Classic Rock" and "Jam Band" comparisons the band gets? Do you agree with them? When I think of jam band I think of 15-minute funk grooves and a sax player soloing forever. Maybe it's because we have long songs that people have slapped us with that obscene and perverted tag. As for classic rock, well that's just funny. It reminds us of the Guess Who. Some people say we're post-classic rock and I think that's a better fit.

Which New Yorker do you most admire? Nikola Tesla