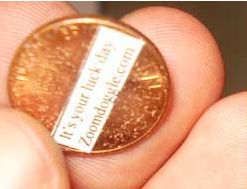 Ex-Road Ruler, and current-prankster, Jake Bronstein was back on the streets recently. This time he wasn't trying to get laid by wearing a wookie suit on the subway, he was getting strangers lucky!

Putting $50 of pennies to use, he "affixed little messages to the underside (the 'tails' side) using spray adhesive and gobs, and gobs, of patience." What would the lucky penny-picker-upper get? A message saying "It's Your Lucky Day" immediately followed by a plug for Bronstein's website! The penny plug did yield some unsubstantiated facts about the oft cast-aside coin, however:

More than you ever wanted to know about pennies and Bronstein's "luck-vertizing" scheme, here.

#advertising
#jake bronstein
#luck
#pennies
#penny
#Zoomdoggle
Do you know the scoop? Comment below or Send us a Tip
A new Gothamist is coming! We’ve moved comments over to our beta site. Click here to join the conversation and get a preview of our new website.