Planning for the Parade 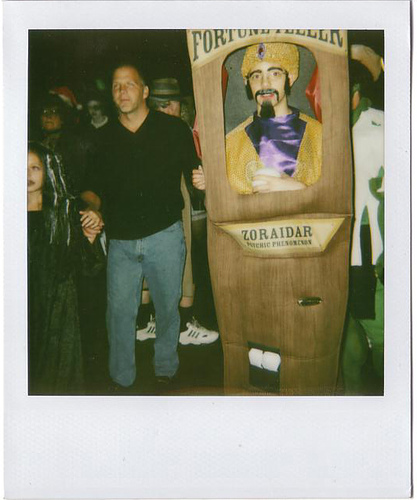 Whether or not you're going to the annual Village Halloween Parade this evening, it'll probably effect your day in some way if you live or work in the area. If you want to avoid the mayhem, don't be anywhere in the vicinity of 6th Avenue between Spring and 22nd Steets. The streets intersecting the route will be closed off at 5pm sharp!

If you want to watch, get there early to stake out a spot. If you want to be a part of the marching madness, show up between 5 and 6:30pm (the staging area usually becomes a little party of its own) and don't be late, the cops do a pretty good job each year of keeping late-comers from entering en route. And the parade website is currently warning "ONLY enter the line-up on 6th Ave. from the East and South between Canal and Spring! The West Side is cut off." Only want to watch from afar? A segment of the parade will be broadcasted live on NY1 from 8 to 9:30pm.

The theme for this year is "Wings of Desire," so the troupe of costumed creatures will probably be topped by some in-air contraptions. The whole flight-by-foot will be led by Donna Henes, our urban shaman, who will be fending off the evil spirits up front. As a special treat, this year's Honorary Grand Marshall, The Creature from Mel Brooks' Young Frankenstein, will turn the Empire State Building orange! It will stay that way until dawn. A little bit of history about the how the parade began and became what it is today:

The Village Halloween Parade began in 1973 when a local mask maker organized a walk from house to house in his neighborhood for his children and their friends. After the second year, Theater for the New City stepped in and began producing the event on a larger scale as part of their City in the Streets program. After the third year, the Parade formed itself into a not-for-profit organization, discontinued its association with Theater for the New City and produced the Parade on its own. Today, the Village Halloween Parade is the largest celebration of its kind in the world and has been picked by Festivals International as "The Best Event in the World" for October 31. The Parade draws more than 50,000 costumed participants and approximately 2 million spectators each year.

Are you going to the best event in the world tonight? Tag your pics on Flickr with "Gothamist"!

Photo of Zoraidar at the parade via i ♥ happy!!'s Flickr.