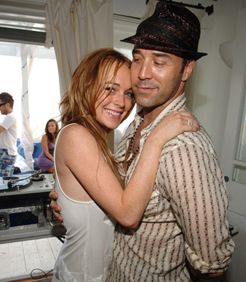 In a world torn by war, with an economy in ruins, it's nice to know we've still got Jeremy Piven's antics to take our minds off things—his abrupt departure from the modestly successful Broadway revival of David Mamet's Speed-the-Plow has outraged the show's producers and cast members.Yesterday Piven's doctor, Carlon Colker, said he ordered Piven to withdraw from the production because of "elevated levels of mercury" in his blood, ostensibly caused by the hard-partying actor's penchant for sushi and Chinese herbs, which can contain heavy metals.

It's now emerged that Piven had been trying to get out of the gig since at least the beginning of the month, and had personally called casting directors and other actors to try and find a replacement. “It was rather unusual,” producer Jeffrey Richards tells the Times. “He was trying to be quote-unquote helpful.” According to theater-insider Michael Riedel at the Post, Piven had been telling friends visiting him backstage that he was "bored out of his mind." And Piven reportedly demanded a different car service to pick him up post-show when he discovered that the car service provided by producers had been snitching about his late-night partying!

Dr. Colker tells the Times that Piven was hospitalized earlier this week, but would not divulge where. Gawker did some digging and finds that the good doctor, a former body builder turned celebrity physician who now runs the Peak Wellness clinic in Greenwich, Connecticut, has been sued in several states. Producers are extremely skeptical of his diagnosis and may take legal action to demand a second opinion. One tells the Post, "We didn't have star insurance, but we should have had asshole insurance."

The Times got some input from Dr. Peter Rabinowitz, the director of clinical services at the Yale Occupational and Environmental Medicine program, who said that "most adult patients at his clinic who are found to have high levels of mercury are doing well, without adverse health effects." And when asked about his co-star's mercury poisoning excuse outside the theater, the brilliant Raul Esparza said, "[If] that's what he says, that's what he says...We have not heard from him. We do not know where he is. It's very disappointing when your co-star leaves."

#broadway
#cancel
#david mamet
#end
#jeremy piven
#mercury
#sick
#speed the plow
#thermometer
Do you know the scoop? Comment below or Send us a Tip
A new Gothamist is coming! We’ve moved comments over to our beta site. Click here to join the conversation and get a preview of our new website.