"I think this year is going to be good again!" I naively told a coworker, after receiving information about this year's Cat Fashion Show at the Algonquin Hotel. Back in 2010, the event debuted with a huge celebratory runway show, dazzling feline fashions, celebrity guests, and even Animal Planet host (and, oddly, my ex-boyfriend) John Fulton at the mic. It was a dream situation for all of the Veronica Corningstones out there. Champagne was popped as cats happily pranced down the runway.

Things took a turn in 2011, however. There were fewer cats, the runway was ditched, and participants sat on tables or huddled in their human's arms.

In 2012, we entered the darkest days of the cat fashion show world. That year the cats were brought upstairs and put on display in cages in a single hotel room. They shared clothes. There was no prance in their step, or if there was, we didn't see it, because of those cages. We hoped this low point would propel organizers to go all out in 2013.

In 2014 the cats started to turn on the humans, going Full Cat with completely disaffected and annoyed expressions. The interest in cat fashion shows wasn't waning though, and media and attendees were still turning up. Surely things would get better next year.

So here we are, 2015. The Year of the Return of the Cat Fashion Show, at last? It certainly seemed that would be the case—the invitation declared that the event would be back in the lobby area, the booze would be flowing, the cats would be uncaged, and special costumes were made to match the theme: first responders. Members of the NYPD would be on hand, as would the Mayor’s Alliance for NYC’s Animals. Also: cake. "I think this year is going to be good again!"

But the cats didn't get the memo. Hostess Matilda didn't even show up. The cats were over it. The cats sent us their own message, and there was no need for words. The cats were... sedated, maybe? Sad, certainly. 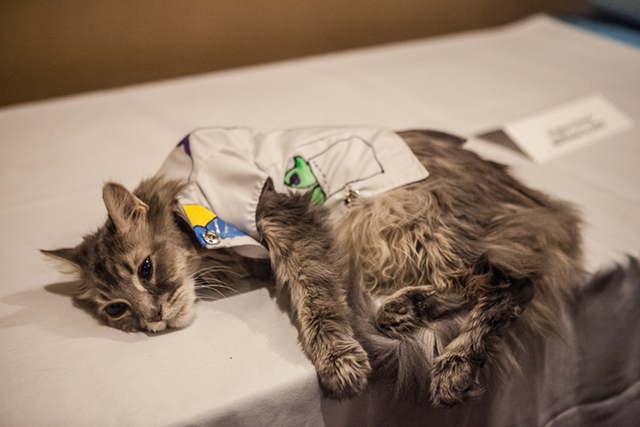 Click through for a look at what some humans made their cats do last night.

#algonquin hotel
#cat fashion show
#original
Do you know the scoop? Comment below or Send us a Tip