Photos: Which Dog Was The Best Dog At The Great PUPkin Halloween Dog Parade? I don't typically like to make a practice of judging dogs, unless we are watching the National Dog Show per mandatory Thanksgiving tradition, or unless it is Halloween weekend, when the dogs don their most inspired, ingenious outfits in order to remind us that some things are still good and pure. One such event took place in Fort Greene Park on Sunday, when the storied Great PUPkin Dog Costume Contest celebrated its 20th anniversary. The contestants did not disappoint.

Viewers met not one but two RBGs, a Dog Pope, some Devil Dogs, Hot Dogs, a little lobster bake in which the child dressed as butter really stole the show, one very reluctant Dog Pinata who's just not sure about this, friend, and myriad other competitors who wowed the audience with creative costumes both store-bought and homemade. Let me be clear: everyone was a winner.

The official winner, however, was a goldendoodle named Kody, whose humans spray-painted him a brilliant shade of garbage green and nestled him in a trashcan, a la Sesame Street's Oscar the Grouch. (This good boy gets extra points for staying seated in his bin amid all the excitement.) In second place came a Mary Poppins chimney sweep crew composed of three kids and a terrier, while third place went to a corgi dressed as the Up house. A civic-minded Wonder Woman lab, a valiant gladiator shiba inu staring down a Cyclops, and an intrepid Amelia Earhart terrier all earned honorable mention. Personally, I enjoyed the doggo dressed up as the Queen of England, but the Frenchie wearing jorts was also very pleasing. 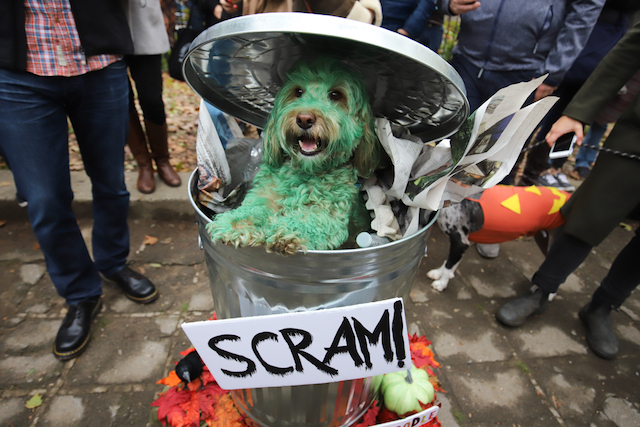 The city's dog-centric events dealt us drama and suspense over the past few months, beginning with the devastating August announcement that the annual Tompkins Square Park Halloween Dog Parade had been CANCELLED due to untenable insurance requirements. Earlier this month, a local organization saved the day, moving the parade to East River Park (where dogs also dazzled on Sunday). Meanwhile, spooky Saturday storms threatened to rain out the Great PUPkin contest, so the show was moved to Sunday, when The Weather decided to let us have this one nice thing.

#dogs
#dogs doing human things
#great pupkin
#halloween
#halloween costumes
#original
Do you know the scoop? Comment below or Send us a Tip