Photos: Welcome These Baby Lemurs And Porcupines To NYC

The Wildlife Conservation Society is excitedly sharing news about new additions to exhibits at the Bronx Zoo and Queens Zoo.

Up at the Bronx Zoo, three baby collared lemurs are now on display at the Madgascar! exhibit. According to the WCS, "The births include a rare set of twins born to mother Vera and father Antoine on April 1st. The single baby was born to mother Jakara and father Gerard on April 6th. All three infants like to nestle in their mothers’ fur. They live in the Spiny Forest exhibit in Madagascar! along with ring-tailed lemurs, radiated tortoises, vasa parrots, red fodies, grey-headed lovebirds, crested couas and ground doves."

The lemurs use their tails for balance while leaping—check this older video out:

Over in Queens, a year-old porcupine, who was born at the Bronx Zoo, is now living at the Queens Zoo's aviary. 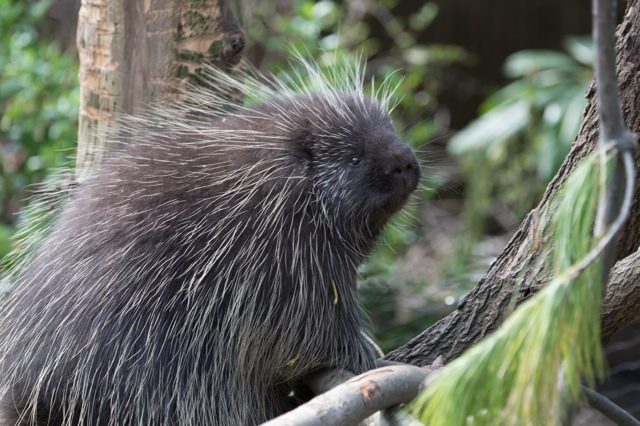 The WCS says, "Porcupines are known for their sharp quills that cover the majority of their bodies. Although a porcupine will first try to flee or climb its way out of danger, it will use its quills if cornered. A common misconception is that porcupines throw their quills. Instead, they raise the quills in defense, turning their backs to strike at potential predators. The quills have a small barb at the tip, causing them to stick in a predator and cause great pain." Yeah, these bros found out the hard way!

#bronx zoo
#lemur
#porcupine
#queens zoo
Do you know the scoop? Comment below or Send us a Tip