This morning, the NYC Department of Transportation showed off its latest street beautification project—except this "street" is actually a tunnel. The 191st Street tunnel, which connects Saint Nicholas Avenue with Broadway under upper Manhattan's steeper topography, is now home to five dazzling murals lining the 900-foot passageway. Wendy Feuer, Assistant Commissioner of Urban Design & Art for NYC DOT, proudly declared, "This is our Lascaux."

Just like the legendary cave, the tunnel had been shadowy and desolate. However, besides installing new LED lights, the DOT commissioned the murals, selecting four artists and one artist team out of 150 applicants. (Outside art professionals, including Sandra Betancourt from the Northern Manhattan Arts Alliance and street artist Alan Ket, were on the committee.) By the way, the DOT is in charge because the tunnel is classified as a street.

If you're entering the tunnel from Broadway, you're instantly greeted by Andrea von Bujdoss/"Queen Andrea"'s affirmations, "Prismatic Power Phrases," which would definitely cheer up any commuter. Then you walk through to Jessie Unterhalter and Katey Truhn's "Caterpeillar Time Travel," which propels you with shapes and stripes.

That's followed by a lush jungle scene from Nelson Rivas (or "Cekis") called "It's Like A Jungle/Aveces Es Como Una Jungle." Nick Kuszyk's "Warp Zone" involves 149 colors swooping in and around you. Finally, right at the end, where the tunnel meets the subway station and St. Nicholas Street, is Fernando Carlo Jr.'s "Art is Life." Carlo, better known to New Yorkers as Cope2, tells pedestrians to "Follow Your Dreams" along with a big "Welcome to the Heights," punctuated with "Pow!"

Cope2 said he was "overwhelmed" about being chosen to contribute, calling it a "blessing," and adding, "I would have done it for free!" The four artists and one artist team each got $15,000 for their work, time and materials, plus a stipend. Von Bujdoss, though, didn't mince words, "It was a hell of a lot of work!"—artists and their teams have been on site for a week, putting in12-hour days. 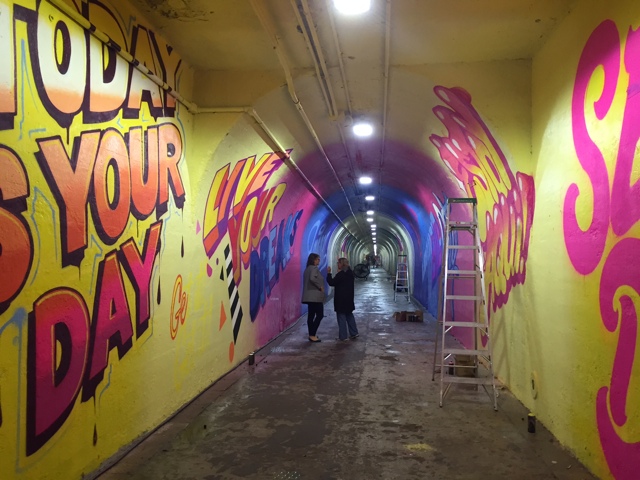 The artists were actually still working on their sections today—Kuszyk noted that the tunnel's wet and cold conditions were the biggest challenge, adding that the DOT was great in bringing in "huge ass fans" to help dry their work. In fact, one section of Unterhalter and Truhn's had basically dripped off the wall, so they were working on repainting it. (They said it takes about an hour to dry, "on a good day.")

"I hope the community enjoys and accepts it," Cope2 said during the press conference. And in the tunnel, as he got ready to finish his section, he reflected on his life as an artist, which started when he was a pre-teen bombing subway cars and now has him working on commissions and presenting numerous gallery shows each year (he has one at the end of the month at the Azart Gallery). Now that the DOT is allowing him to paint their walls, he wistfully said, "I'd like to paint a subway car... and put it in the Transit Museum."

Community Board 12 chair George Fernandez Jr. called the tunnel a "jewel" for Washington Heights, detailing the hard work the board, DOT and community put into transforming it from being "scary" to its current state. He cautioned, "Please do not deface the tunnel... Do not do your ups or bombings. If you are caught, you will be arrested and prosecuted. We want this tunnel to stay beautiful."

After the press preview, one resident ducked his head to take a peek, saying, "That looks good." Then he muttered, "Hope we can keep it that way."