In the finale of his whirlwind, surprise "pop-up tour" covering three cities in 10 hours, Stevie Wonder delighted the crowd in Central Park's Summerstage with an hour of song, reflection and gratitude, "I come here to say thank you for everything you've ever done for me... I love you." The devoted (and sweaty) crowd repeatedly cheered and yelled, "We love you!"

The music icon's surprise Monday concerts—he started the day in D.C. with a 10 a.m. show, then headed to Philadelphia for an afternoon serenade before closing things out in New York City—were to promote the extension of his acclaimed Songs in the Key of Life tour, "a live adaptation" of his legendary 1976 album, which focuses on his personal life as well as broader issues of social justice. The final show will be a November 24th concert at Madison Square Garden; the tour started at MSG last November, and the NY Times raved, "[T]he concert was a triumph: not a simple nostalgia trip but a return visit to songs and ideas that still matter."

Like "Love's In Need Of Love Today" and "Village Ghetto Land":

"I just feel so much has been going on in the world," Wonder said, explaining why he wanted to continue revisiting the album. In spite of the "incredible strides" our country has made, "we've gone into this negative place." He lamented the racial tension and general hatred running through our society—"We need to fix the plant by fixing each other"—and also brought up gun violence, "We've got to put an end to it... Knowing that 10,000 people a year are killed by guns...there's something majorly wrong when we're numb" to stories about deaths by guns. He urged citizens and politicians to be accountable, "You can't take a life back," and emphasized, "We need to encourage each other to love each other... here's never too much love." 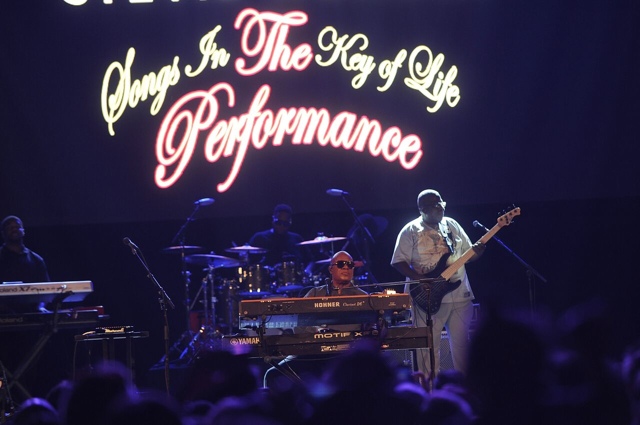 Wonder was passionate and engaged, even while performing under bright stage lights in the already sultry August conditions. A reporter asked during the Q&A how the day had been going, and Wonder admitted that his throat was a little off in the morning. He revealed that when he mentioned doing three cities in one day to his team, they basically thought he was crazy, "But I had a vision of doing this... I just believed it could be done."

Ending the tour at Madison Square Garden wasn't planned but a happy coincidence. He joked that this meant, "I can buy my kiddies Christmas presents. I can buy me a Tesla I can drive," and paused to ask, "Would you trust me driving you in a Tesla?"

Wonder also played "If It's Magic," "Contusion," "As," "Sir Duke," "I Wish" and "Another Star"—delivering well above the promised two to three songs. And we also learned that Wonder is a fan of The Weeknd!

"Another Star" and Wonder's good-bye...until November 24:

Wonder is performing in a tribute to Gladys Knight and the Pips (organized by Oprah Winfrey) at the Apollo Theater, the site of his first-ever gig, today.

Tickets for the final leg of the Songs in the Key of Life tour will go on sale to the general public on August 21 at 10 a.m.; Citi cardmembers can get tickets tomorrow, August 18, at 10 a.m.

#central park
#Songs in the Key of Life
#stevie wonder
#summerstage
#original
Do you know the scoop? Comment below or Send us a Tip