Hundreds showed up, most decked out in purple (the dress code was announced prior to the party), taking over Bed-Stuy Restoration Plaza. The music was loud, the vibes were good, and the party went on for over six hours, with Spike Lee and Sway holding court. Rev. Al Sharpton, Rosie Perez, and NBA stars John Salley and Cleanthony Earl were also there, along with bassist André Cymone, Prince's longtime friend and bandmate. 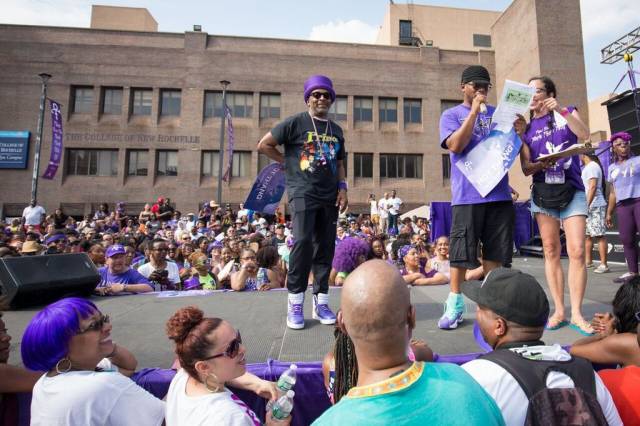 A little red corvette was also parked on the grounds in front of a sign that read: "Baby, that was much too fast. 1958-2016." Other sign were hanging over the crowd as well, including a purple on featuring Prince's "Love Symbol."

And Spike Lee got some new shoes:

Sharpton paid tribute to Muhammad Ali, too, delivering a prayer for both Prince and Ali.

In Brooklyn at Spike Lee's street party. I gave the tribute and prayer for Muhammed Ali and Prince.

Sharpton said, "As one who knew him for many years, I told Spike maybe he left 'cause he heard there was a jam session. And Prince has heated up the band on the other side. And somewhere I see Ali waving his hands saying 'Purple Rain, Purple Rain.' They're having a big jam session."