Photos, Videos: New Banksy Is At Elizabeth And Houston The guard at the Houston and Elizabeth spot rumored to be the new Banksy installation site is telling us that we'll "have to wait until 6 p.m." to find out what's behind the tarp. So basically, that is confirmation that the new Banksy is at that location. Earlier today we stopped by and spotted a bumper car, speakers, a stage area, a scythe, and lights.

UPDATE, 5:48 p.m.: After we spotted him at a nearby bar, one Banksy crew member made his way to the site and stepped behind the tarp.

UPDATE, 6 p.m.: Word is the unveiling was delayed until 6:30 p.m. There are about 200 people surrounding the site now.

UPDATE, 6:05 p.m.: Banksy just uploaded this to Instagram. The caption is Bowery but he's gotten his own location wrong before!:

UPDATE, 6:20 p.m.: There's accordion music and smoke coming from behind the tarp. And the tarp is being cut down by Steve Zissou-sky!

UPDATE, 6:29 p.m.: Banksy updated his website with this video, featuring Blue Oyster Cult, and noting it will run "tonight through Sunday, dusk until midnight."

And Bill Cunningham is there:

Bill Cunningham just rolled up to the Banksy meltdown on Houston. Wanted to hug him. Didn’t.

Scott Lynch tells us: "At least 1000 people, but installation itself is kind of slight. Grim Reaper in a bumper car tootles around to a guy playing accordion, then every five minutes Blue Oyster Cult comes on with disco lights. Reaper spins around. Repeat." But whatever, it's FUN!

UPDATE, 7:15 p.m.: The audio is now up on Banksy's site, welcoming you to the fair. He says, "This is the dance of death," and adds that "one of you will die tonight."

And was this piece based off a painting he gave a band after he accidentally stole their name for the title of his movie, Exit Through the Gift Shop? Seems like it. (h/t Hyperallergic) 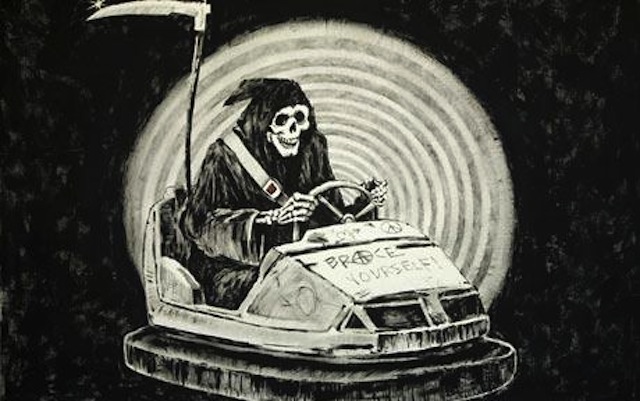 And here's some more video, courtesy of Lloyd Johnston:

Some believe this man walking in to the gated off area today (and then seen briefly directing things inside) is Banksy. This is the same man who was spotted during Ronald McDonald's trial run, and taking photographs at the Woodside piece. But LA LA LA we don't really want him unmasked, do we?

#banksy
#better out than in
Do you know the scoop? Comment below or Send us a Tip