Tens of thousands of mostly half-naked and/or costumed partygoers packed onto Randall's Island yesterday for the first day of the seventh annual Electric Zoo EDM Festival. The festival, which features many of the scene's most popular DJs and live acts performing on five different stages, continues today and Sunday, and tickets for both days are still available. 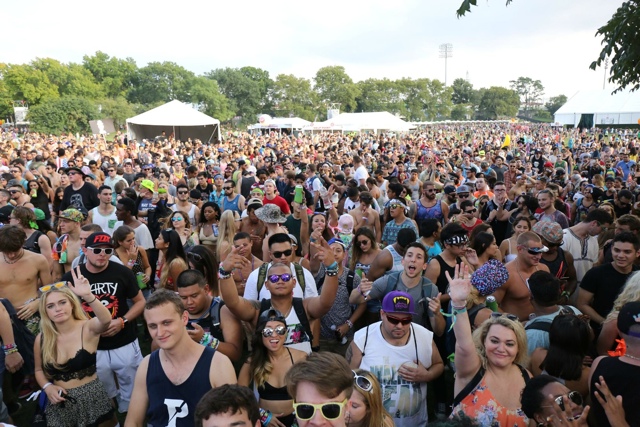 EZoo achieved notoriety in 2013 when two young people died from an overdose of Molly while on Randall's Island. Last year, festival organizers ramped up security as well as safety procedures, in the form of aggressive drug-education videos and free water distribution. However, though the weekend last year was OD-free, lightning storms shut the whole thing down early on Sunday.

Will EZoo 2015 be the charm? So far, so good, with only a few obviously too-wasted kids in evidence. Mostly, though, it was good vibes all around, with people feeling sexy, dancing and screaming, tripping or rolling, laughing and having a blast, and displaying a seemingly inexhaustible enthusiasm for hearing the best drop.

Electric Zoo takes place on Randall's Island, and general admission tickets are $119 for each day over the weekend. VIP and Platinum tickets are considerably more, but those people in their special areas mostly just looked bored. There's lots of good food available and plenty of booze, but you have use EZ Bucks for everything, and the conversion rate is $20 USD for $9 EZ Bucks. Note that most food items cost $5 EZ Bucks, so $9 is a pretty useless amount if you're just trying to grab some dinner.

#edm
#electric zoo
#ezoo
#randall's island
#original
Do you know the scoop? Comment below or Send us a Tip