Photos, Video: Welcoming 2016 With One Million Other People In Times Square In the end, it all went exactly as planned: the ball dropped, the mountains of confetti drifted prettily down, and an estimated one million people shouted with joy, kissed with abandon, took endless selfies, and rang in the New Year in Times Square. 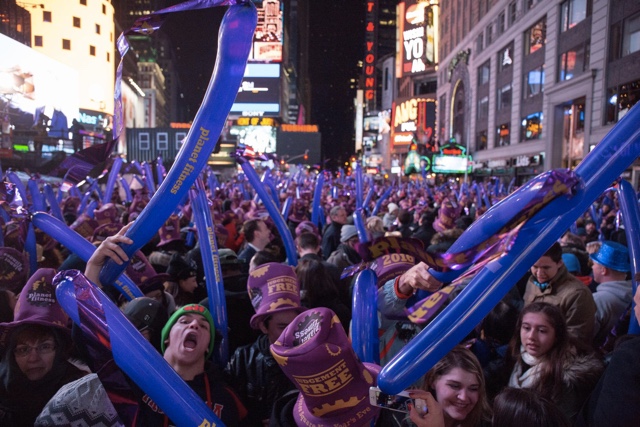 In contrast to the day's aggressive security and tedious waiting, the atmosphere here during the final two hours of 2015 was decidedly more relaxed and fun. Branded balloon noodles and wacky tall hats were handed out to literally everyone. Family-friendly club bangers got the eager-for-anything crowd bopping and singing along. Ryan Seacrest and various celebrities whom I couldn't quite place wandered around giving a thrill to those along the viewing pen perimeters.

Even the NYPD seemed to be having a good time, snapping photos and FaceTiming, joshing with the white shirts (who were out in numbers), vigilant, certainly, but also noticeably comfortable because everyone in attendance had already be screened and searched hours and hours ago, so it was more a matter of being a presence than any sort of vigorous policing.

#new year's eve
#nye 2016
#nypd
#Times Square
Do you know the scoop? Comment below or Send us a Tip