You haven't really lived until you've seen a gorgeous Finnish Spitz raise its pointy little fur ears toward the heavens as its groomer repeatedly spritzes its butt with water. There is a mix of curiosity and alarm that flashes across its fox-like face, but it is not enough to cause any serious vocalizations from the "Barking Bird Dog." Considering that this particular breed is known for their expressive yodeling (hence the nickname), this is but another tolerable inconvenience in the life of a show dog. For those of us merely passing by this spectacle—people used to our uniquely dumb, loving, messy, spritz-averse mutts at home—it's a phenomenally alien thing to behold. Like the Counting Crows might put it, there is life before seeing a pampered non-sporting group best of breed butt spritz, and then there is everything after. 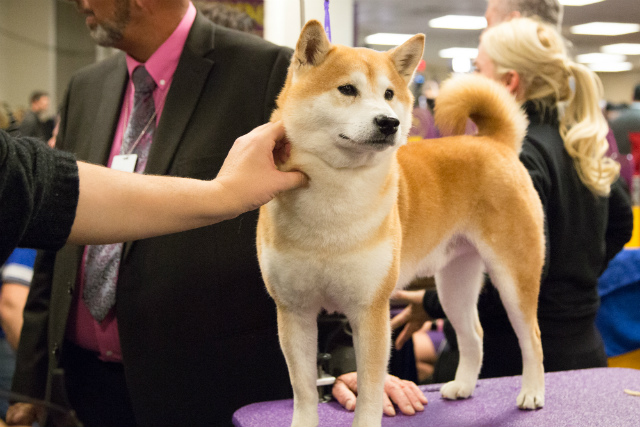 Sometime between watching the butt spritz and trying to cheer up a depressed French Bulldog who was giving a Coton De Tulear some serious side eye behind-the-scenes at Monday's Westminster Kennel Club Dog Show event at MSG, I had something of a personal revelation: I did not care one bit about watching the competition. How dare humans have the gall to pit one sweet loving angel against another! Spending quality time backstage with the pups as they got ready, you walk away with a deep appreciation for every single adorable inbred animal in the house. There are no winners as far as I'm concerned, because every dog I had the privilege of petting won a gold medal in my heart. 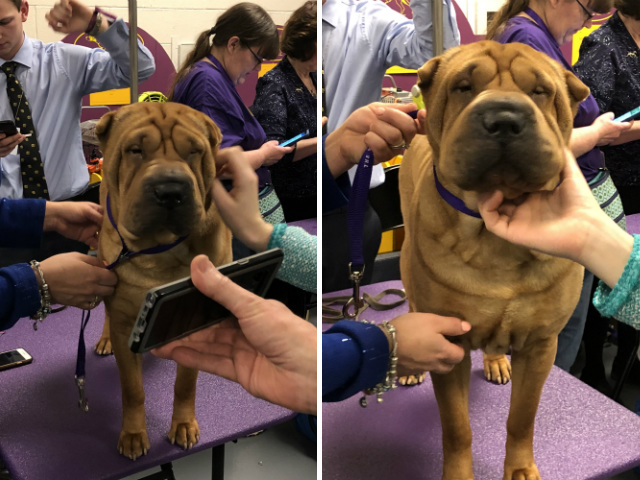 MY NAME IS OZYMANDIAS, KING OF KINGS: LOOK ON MY WORKS, YE MIGHTY, AND DESPAIR (Ben Yakas/Gothamist)

Having said that, it's really too bad that this story is filled exclusively with the worst dogs in the world. Look at the trash dogs in the photo gallery!! They're so bad, it makes me mad!! The dogs in the video below? Even worse!! Get off my lawn!! My lawn is this story!!

Okay, I take that back: there is one really good dog, yes you are, yes yes, so very good, in this story. His name is Roy. He is a two-year-old Icelandic Sheepdog. When I first approached him, he looked like he was halfway into a dream about running in a field filled with dancing bones. His tail sheepishly started wagging at the attention—then when I started saying his name, it began moving at a speed I would describe as "hyperventilating windshield wipers."

I quickly learned that Roy was the product of frozen semen from his father Luke, also a showdog, who died many years ago of a brain aneurysm. By the time Roy had jumped on top of me to give me a hug, I was midway through filling out an application to buy the next available Icelandic Sheepdog puppy. 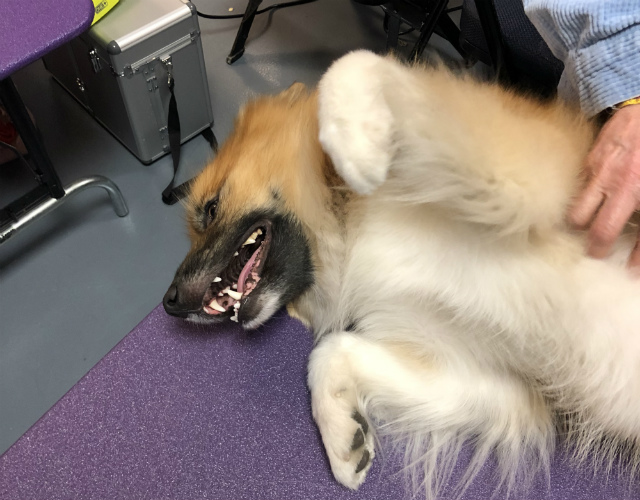 There was also an very handsome Australian Shepherd named, I kid you not, "Trump." While I contemplated calling animal services on its owners, I was told that he was most definitely NOT named after you-know-who, but rather after the bridge move ("trump card"). His trainer did say his showname gave him a "competitive edge," though I'm not at all sure if it was because the name intimidates other dogs or because there is a secret pro-Trump faction within the American Kennel Club...a sort of "Deep Kennel." Trump, if you're reading this, I can still call animal services. 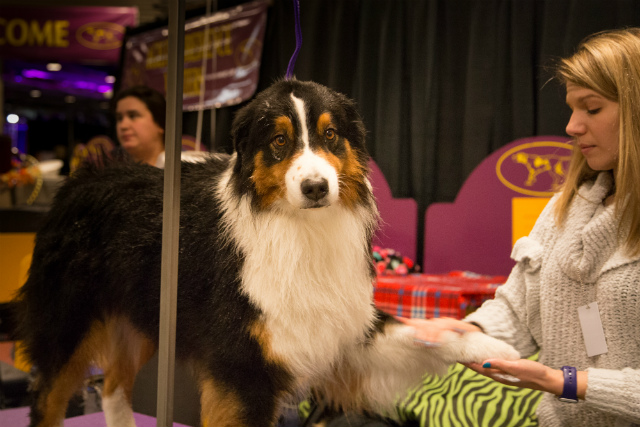 And remember all that stuff I said about how the actual competition doesn't interest me anymore? Well, I take that back, because any competition that can produce an instant star like Winky—undoubtedly the world's slowest, bravest Bichon Frise—deserves to exist. As Gideon Resnick put it, "the moment when winky looks out into the audience should win the oscar over rami malek."

And here's Gabby, a Papillon who is the exact opposite of Winky in every way except one: she is also an instant star who shines brighter than Alpha Canis Majoris. (Also, if you skip ahead to 1:22...is her handler shoving her away??)

More from the Agility Championship at the #WKCDogShow now on FOX! pic.twitter.com/Cv0XERwT7w

Who could forget about Rudy, who deserves a steak for running this race:

A bulldog doing agility is a marvelous sight pic.twitter.com/YboGlhp3hk

And what about Verb? To me, she is more like a adjective...and that adjective is ASTOUNDING.

I WANT PROOF THAT SHE GOT A TREAT pic.twitter.com/yMWuX8YQt1

I have nothing more to say about this. Dogs are the worst. I love only Roy.