MoMA PS1 held their annual Spring Open House yesterday afternoon, inviting the public to visit the museum for free and unveiling three new exhibitions by artists Cao Fei, Rodney McMillian, and Thea Djordjadze. There were free performances in PS1's courtyard dome as well, including a raucous show by The Notorious MSG.

Of the new exhibitions, Beijing-based artist Cao Fei's was by far the largest and most engrossing, combining films, short videos, photography, and the miniaturized "sets" from her apocalyptic (though kind of amusing) La Town. Most of Fei's films reward patient viewing, including Whose Utopia?, for which she filmed workers at a dreary lighting factory broadly acting out their secret passions and fantasies; and Haze and Fog, a "magical realist zombie movie" of contemporary China. RMB City is interesting too, set in a virtual Second Life city made by Fei's avatar China Tracy over the course of two years. 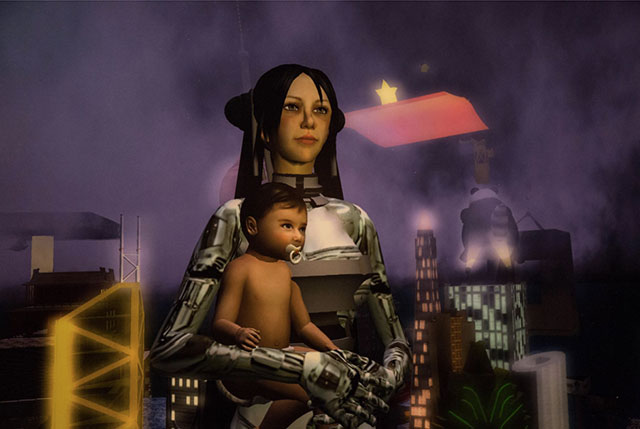 For his Landscape Paintings show, Rodney McMillian used leftover paint from construction supply stores and second-hand bed sheets as his canvases. A close inspection of most of these reveal traces of and hints about their former owners. In PS1's soaring duplex gallery, Georgian artist Thea Djordjadze created a site-specific, minimalist installation that apparently evokes a 12th century pharmacy located in the cave city of Vardzia.

Not new yesterday but definitely worth checking out are the disfigured works of Lionel Maunz in the museum's boiler room. And if you never got around to seeing the Greater New York show, one of that exhibition's best rooms, filled with eye-catching sculptures by the likes of Kiki Smith, Lutz Bacher Red Grooms, Rina Banerjee, and Ugo Rondinone, is still open for viewing through at least mid-summer.

The VW Dome was packed to capacity for PS1's director Klaus Biesenbach chat with Cao Fei, and then the place went nuts when The Notorious MSG hit the stage for a set of their super-loud, jokey-flow rap tunes. Or, at least, the boys of Notorious went nuts. Much of the crowd on hand looked a little bewildered, to be honest.

#cao fei
#notorious msg
#ps1
#spring open house
Do you know the scoop? Comment below or Send us a Tip
A new Gothamist is coming! We’ve moved comments over to our beta site. Click here to join the conversation and get a preview of our new website.