Kenny Salls had never seen anything like it. The 22-year-old Amish man—three months into his Rumspringa—stood and marveled at the crowds bustling through the Kings Theatre Saturday for the 2015 National Beard & Mustache Championships. Stroking his own scraggly brown beard, Salls grinned at his fellow competitors and was all too happy to shake hands and pose for photos. "It's something I never really realized was out there," he said.

Salls hails from West Connecticut and, like many of the dozens competing at Saturday's championships, was a rookie, testing the waters of competitive beardsmanship. Salls competed—naturally—in the Amish Beard category, but failed to place high enough for a trophy, medal, or ribbon. "Some of these guys have much larger beards than I do, so they've been at it a lot longer than I have," he said, shrugging off the loss.

Like everyone else at the Beard & Mustache Championships, Salls was just happy to be there. The Kings Theatre was a wild carnival of facial hair feats that fell into categories including Imperial, Hungarian, Dali, English, and Freestyle mustaches, plus Amish, Fu Manchu, Musketeer, Sideburns, Garibaldi, and Full beard. "Competitions" consisted of each contestant standing in line on stage while fans shouted for favorites and judges deliberated the merits of each mane. 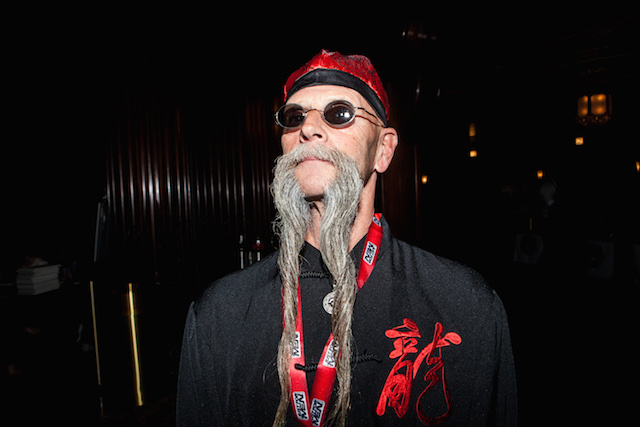 But just as much action could be found in the theater's seats and front lobby, where bearded men, the women who want them, and the men who want to be them all milled about making friends, exchanging numbers, perusing vendors' wax and trimmer offerings, and just generally admiring each others' assets. Just like many competitive eating and drag queen contests, the vibe at a beard and mustache competition is infectiously upbeat; all these men really want is to cheer each other on, take a few selfies, and strut their stuff.

"With this group of guys, it's real good. Everyone's real friendly and very open," Richard Smith, 62, explained. The New Hampshire resident made the trip to New York specifically for the event, and with two silvery grey strands flowing from his upper lip, dominated the Fu Manchu category and took home a first place medal.

It was his first time competing, but Smith already had all the confidence he'd need. "I can't grow good hair on my head but I can grow a good beard," he said. "With a mustache like this, going to the beach or walking in town, people are constantly looking. You're trained. People are staring at you, looking at you saying 'That's weird' or whatever...It doesn't bother me. It's fine. It's an icebreaker too."

For Robert Burns, his Hungarian-style mustache is not only an ice breaker—it's a means of job security. The 34-year-old teacher and handyman from Rexburg, Idaho will often turn friendly chats about his 'stache into a business pitch. "I've remodeled kitchens and done all kinds of lucrative things just because I had a mustache they stopped and looked at," he said Saturday.

"I get compliments all the time. Nobody tells me my fat looks good, you know?" 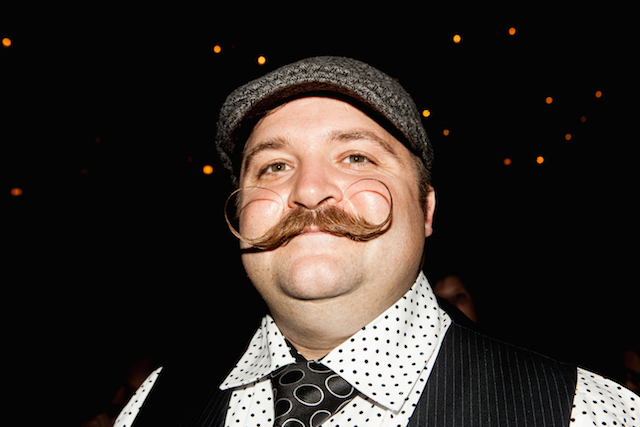 After winners in each category had been declared, the National Championships closed with the ultimate "Best In Show" competition, and yet backstage, seconds before walking out, the crowd of men remained unflinchingly positive, thrilled at each other's style and eager to shake hands and swap grooming tips. Scott Metts, 32, of Orlando Florida was declared the overall champion by judges' decision, his Full Beard with Styled Mustache eliciting high-decibel cheers from the crowd. It was Metts's first ever win, the payoff after a two and a half years of growing and nine previous competitions.

Still beaming like a troupe of off-the-clock vaudeville and steampunk superheroes, the finalists posed for pictures and shouted as Metts dashed over to kiss his girlfriend, who was in tears. "I feel amazing," he said. "Everything about this is incredible."

#beards
#gothamist films
#original
Do you know the scoop? Comment below or Send us a Tip
A new Gothamist is coming! We’ve moved comments over to our beta site. Click here to join the conversation and get a preview of our new website.