Hopping a ferry to Governors Island usually fades from our weekend plans radar come September, but as I learned yesterday wandering through the stately old mansions on Colonels' Row, that's obviously a mistake. For the seventh year in row, the non-profit 4heads has organized the Governors Island Art Fair, for which 100 artists, both local and global, are given free reign over a room in one of these late 19th-century brick houses, and allowed to wreck whatever havoc they want.

As you can imagine, with 100 different galleries/installations to check out, one's level of engagement and delight can vary widely from room to room throughout the exhibition. I tended to like the pieces that were the most site-specific and integrated architectural or thematic elements of the space into the work, but there were plenty of straight-up paintings-hung-on-the-wall rooms that were also pretty great. And if you ever hit a dud, there's another room right around the corner! And another one after that! 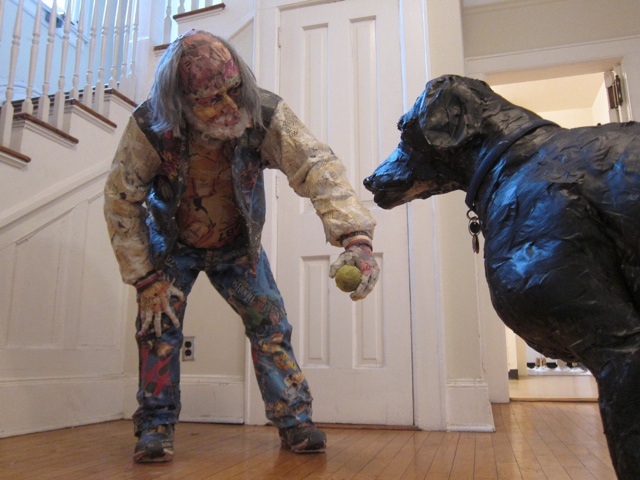 Sculptures by Will Kurtz (Scott Lynch/Gothamist)

Plus it's just fun to roam through these abandoned officers' quarters, in all of their faded glory. Peeling paint, broken plaster, and creaky stairs are the norm here, and the third floor, with those odd windows and claustrophobic slanted ceilings... each time I reached the landing up there I would smile and think "oh cool attic."

The Governors Island Art Show 2014 is open every Saturday and Sunday in September, from 11:00 a.m. to 6:00 p.m. The show is free, but donations, either placed in watering cans hung by the each of the front doors or via Kickstarter, are graciously accepted.

#art fair
#colonels row
#governors island
#original
Do you know the scoop? Comment below or Send us a Tip