A few weeks before its scheduled demolition, the South Street Seaport mall feels like a dying star, albeit one with airbrush tattoos and cheap frozen margaritas. Even the tourists who stumble into the Pier 17 shops seem numb with the realization that these twisted vestiges of Americana belong in a David Lynch movie, not Lower Manhattan. But walk past the "Your Name On Rice" kiosk and the store specializing in Nightmare Before Christmas candelabras and you're rewarded with a carpeted monstrosity worth exploring: a 10,000 square-foot "bespoke wallpaper" store and event space in the belly of an old Victoria's Secret.

Flat Vernacular, a husband-and-wife design firm whose clients include Lena Dunham, Jeffrey Bilhuber, and fashion designer Tia Cibani, moved into the vacated Victoria's Secret after Memorial Day. The couple was tipped off by a friend who said the owner of the mall, the Howard Hughes Corporation, wanted to fill the space on the ground floor with a local business for the summer, rent-free. They'd only have to pay for the insurance.

"I don't know anyone else who has an established business who would say no to a place this huge, where you can do whatever you want," explained Brian Kaspr, one half of Flat Vernacular. "I have no idea what the market rate on this place would be, but even though it's in this empty mall, it'd probably be insane."

His wife and business partner, Payton Turner, agreed: "It feels like we're plopped down in the middle of Maryland, but it's allowed us to experiment and execute some ideas we otherwise wouldn't have been able to in our studio."

Before they could begin their own work, the pair had to de-Victoria's Secret the cavernous store, which meant unscrewing dozens of the hundreds of white-hot halogen track lights that blanket the ceiling, peeling off the puffy clouds the retailer had used to blot out a handsome view of the Brooklyn Bridge, and dumping more than 60 gallons of paint on the floor to neutralize the nauseating rosé carpet.

"It took two or three weeks to knock the pink out of this place," Kaspr says. "A few of the old Victoria's Secret employees came in to check it out and they were blown away." 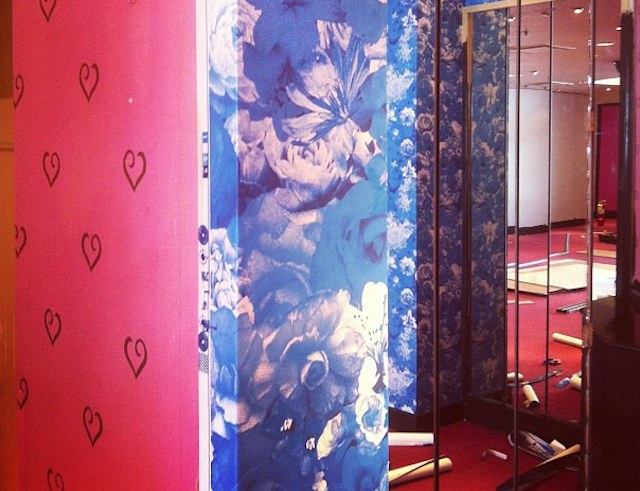 Remnants of Victoria's Secret hearts before they were covered (Flat Vernacular)

Aside from the former retail employees, the sporadic foot traffic has consisted mainly of tourists and kids on field trips. "Lots of school kids from the Bronx or Long Island come in," Turner says. "They'll say, 'Whoa you do this for your job?' and they ask a lot of questions about how we work."

When Flat Vernacular hosts parties in the space (the final one was last night, sadly), it's hard to shake the feeling that you're supposed to meet your mom in the food court in fifteen minutes—but suburban nostalgia pairs perfectly with booze. Last night the crowd that arrived to have their Beggu bags painted swigged beers and examined wooden baubles for sale from Fort Makers, a Brooklyn design firm that's exhibited at MoMA PS1 and has been featured in the Times. Flat Vernacular invited them to share their space for a few weeks.

A Brooklyn-based wallpaper store that covered Lena Dunham's apartment with stickers, moved into a pop-up space inside an empty mall reeking of Middle America on the tip of Manhattan and decided to share it with their friends who build art installations they call "forts." Isn't this a little too much like a plot on GIRLS? (And yes, the pair also provided some wallpaper for the show.)

"Oh, you're a husband and wife team, that's so whimsical," Turner says in the tone of an imaginary skeptic. "Oh, your wallpaper has stickers, how twee. We take ourselves seriously, but not that seriously."

"And 'whimsical,' " Turner scoffs. "How about colorful, or creative, or engaging?"

"Weird is fine!" she replies. And it is, delightfully so.

While there are no more parties, you'll be able to check out the Flat Vernacular space during their business hours (11-7) through September 1st, when the mall is vacated for demolition. In two years it will rise from the ashes as….another mall!