Before yesterday, the last time NYC public school kids enjoyed a snow day was two years ago. So when Mayor de Blasio announced on Wednesday—in the midst of a record-breaking 60-degree day, no less—that schools would be closed the following morning... well, let's just say there was much rejoicing in certain corners of our city.

Boy from the #Bronx dances after finding out there will be a snow day! Thanks 7_lore12 for sharing with @News12BX pic.twitter.com/tTXQuMNLZb

(Unless you go to Success Academy. For those kids it was just "Thursday.")

Anyway, if you're a kid who lives anywhere remotely close to the Tennis House in Brooklyn's Prospect Park, you probably spent a good chunk of your snow day careening down the hills at the southern end of the Long Meadow. In the late afternoon yesterday, after the winter storm had already deposited most of its nearly 10 inches of the white stuff, scores of kids (and adults) were out there having a blast. 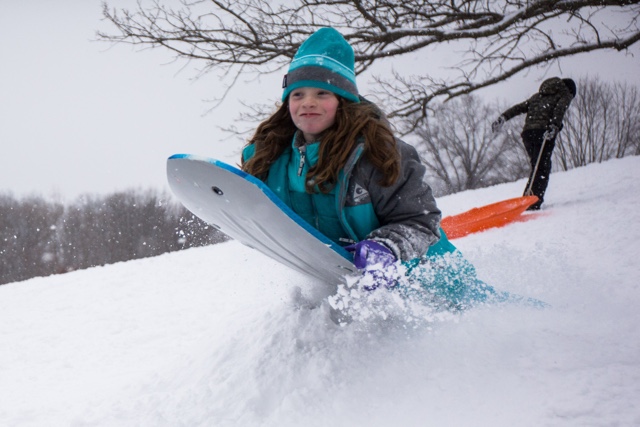 There were a couple of good jumps on the steepest hill, which provided plenty of mock-terror shrieks, as well as a number of broken plastic saucers. Collisions among sledders were utterly encouraged. And burying your buddy in the snow seemed to be a popular pastime in this neck of the Brooklyn woods.

Sadly, above-freezing temperatures are forecast for the weekend, so it's likely there will not be another good sledding day for some time to come—but no one is stopping you from checking out conditions on Saturday morning! Here's the NYC Parks Department list of top sledding hills in each borough (obviously, there are unofficial ones wherever there's sloping grade, like this part in Riverside Park near West 73rd Street).

#prospect park
#sledding
#snow day
#original
Do you know the scoop? Comment below or Send us a Tip