It's a proven fact that the Fast and Furious series—15 years, seven movies, with Furious 8 coming in 2017—represents one of the great narrative arcs in American cinematic history. So when the folks at BBQ Films get their hands on the franchise's first movie, The Fast and The Furious, and turn Villain in Williamsburg into Toretto's Garage, you know it's going to be a fanboy/girl's dream.

BBQ Films excel at this sort of party-having, immersive movie-watching experience. From recreating Ghostbusters HQ in Williamsburg to hosting a Blade-themed Blood Rave.

For The Fast and The Furious screening party the theme was a Toretto Family Cookout, with Hard Times Sundaes providing burgers, dogs, and fries for the more than 200 people who attended. There were bottles of Corona (of course) and shots at the bar, a "photo booth" complete with hot cars and mechanic's tools for props, Ja Rule karaoke, free tattoos, and a general, all-around rowdy atmosphere. 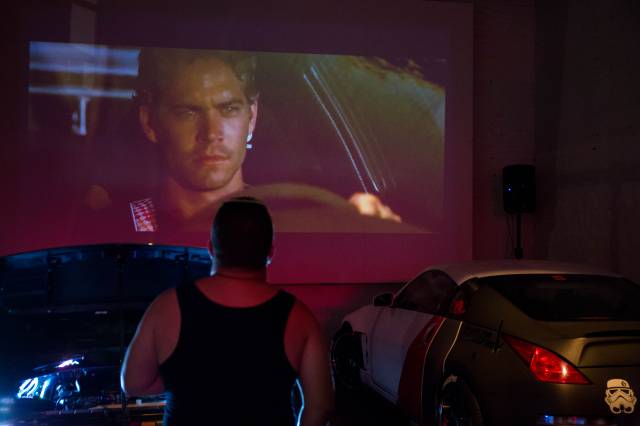 This was about the hundredth time most of these people had watched the movie (one couple just got into town from England that morning, for their wedding here this week, but still couldn't resist the lure of Torettos), so there was plenty of cheering and jokes during the screening.

BBQ Films organizes cinematic events such as this several times a year, throwing parties in locations throughout the city. Get on their mailing list to learn about what's coming next (and believe me, it's going to be a fun—and loud!—one.

#bbq films
#the fast and the furious
#williamsburg
#original
Do you know the scoop? Comment below or Send us a Tip