Thursday afternoon ennui sufferers: heal thyselves in the light of this tiny Canadian Saw-whet owl that was nursed back to health at a wildlife rehabilitation center, then released back into Central Park, like so many whispered dreams forgotten, yet still stirring in the wind.

City Room reports that the owl, dubbed Owl Jolson, after a re-appropriated cartoon character in Wes Anderson's next film, was found in mid-October by a man in Sea Gate, Brooklyn, and taken to the Parks Department's headquarters in a shoebox. “He didn’t stay, he didn’t give a name. He just said, ‘Here’s an owl,’ ” a Parks spokesperson told the Times, presumably before a roving band of travelers offered the raptor exotic spices and precious metals. 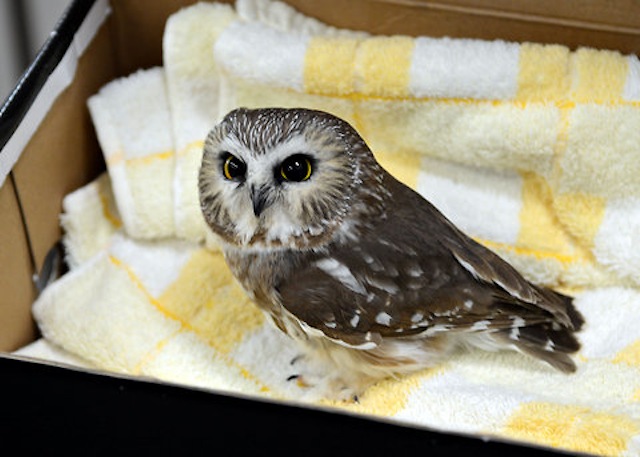 Jolson in his shoebox (Daniel Avila, NYC Parks and Recreation)

The owl had spent a few days on the ground and was initially believed to be a juvenile, given the general scientific principle that something so goddamn adorably small couldn't possibly be tainted by the stain of adulthood. But ranger Rob Mastrianni ID'd Jolson as a Saw-whet owl, which reach the height of seven to eight inches and migrate south from Canada during the winter. Here's Mastrianni explaining the migration:

Jolson suffered from "head trauma, a droopy wing and some inflammation," but two months later he (or she? no one knows its sex, because Cute is androgynous and because it's hard to tell OK?) was nursed back to health at a shelter on Long Island, and released yesterday. Here's a photo of the exact moment of Owl Jolson's release, which should be plastered in every elementary school cafeteria—no, the dollar bill. 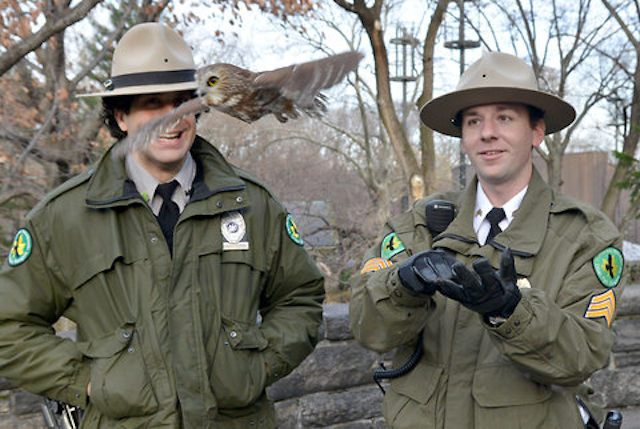 According to the Cornell Lab of Orinthology, Saw-whet owls mainly eat deer mice, usually in two separate meals, except when "One owl was found dead after apparently trying to swallow a large mouse whole."

Endearing, even in death. If you want to hear what a Saw-whet owl sounds like, here's a link to nine different vocalizations. Linger on the hauntingly beautiful "winter vocalizations," and delight in the sound of baby Saw-whets chirping before a meal.

#adorability index
#central park
#owl jolson
#owls
#parks department
#your move buzzfeed
Do you know the scoop? Comment below or Send us a Tip