Yesterday afternoon thousands of totally insane people took off their clothes and ran into the Atlantic Ocean for the annual Coney Island Polar Bear Club New Year's swim. Afterwards, most of them claimed it was "fun" or "invigorating" or "a great way to start 2016", but the guy shivering so violently that he couldn't talk or even sip his beer was the only one telling the truth.

As always there were plenty of crazy costumes, enthusiastic pre-gaming at Ruby's, instant camaraderie and bonhomie, shrieks of terror and delight, and, considering that neither the holiday (New Year's) nor the act itself (swimming in winter) is specifically American in any way, an oddly intense level of patriotism. 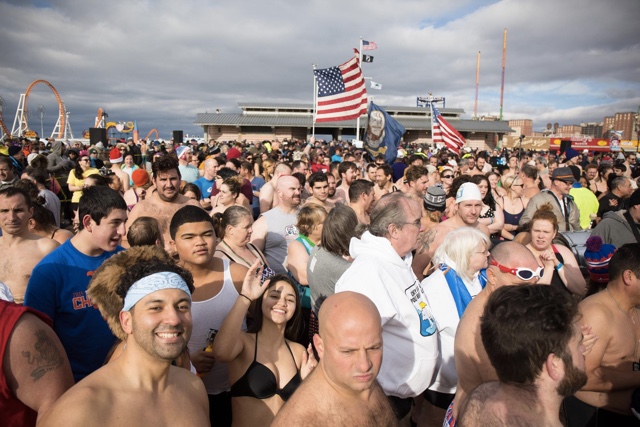 The water temperature was announced as 50 degrees right before the first wave of officially registered swimmers sprinted down the beach and into the briny shallows. The air was considerably colder, in the low 40s, with moments of sunshine mostly cancelled out by a recurring and unwelcome wind. 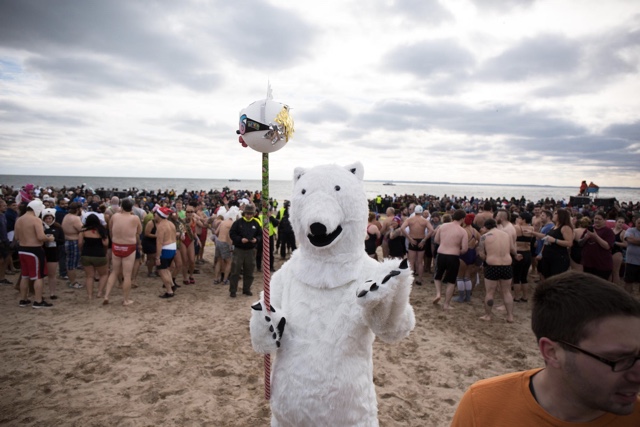 The Coney Island Polar Bear Club is the oldest winter bathing organization in the country, and though its members swim every Sunday all winter long, the New Year's plunge has become both a beloved tradition and bucket-list event for thousands of guests. The event is a lucrative fund-raiser as well, with suggested registration fees and merchandise sales benefiting Camp Sunshine, a family retreat for children with life-threatening illnesses.

#coney island
#new year's day 2016
#polar bear club
#polar bear swim
Do you know the scoop? Comment below or Send us a Tip