Over two thousand people gathered on Central Park's East Meadow Tuesday for a raucous all-ages party marking what would have been John Lennon's 75th birthday (even though his actual birthday is October 9th). Countless peace signs were flashed by adults as children played games and beat drums in unison before packing tightly into the shape of a peace sign—hoping to make history.

The event was organized by Yoko Ono and the John Lennon Educational Tour Bus, as both a giant birthday party for Lennon and an attempt to set a new world record for the largest human peace sign. Standing amongst the masses was Scott Wyatt of Cedar City, Utah—"I'm probably the only university president here," he joked.

Wyatt was there surrounded by over 40 of his freshman students from Southern Utah University, all of them enrolled in a survey course on "Freedom" that he had helped organize. The class was in the midst of a trip that included Washington D.C., Philadelphia, and a number of New York landmarks, but when Wyatt learned of the Lennon gathering, he added it to his itinerary. A self-professed "hardcore Beatles fan," Wyatt smiled as his students waved for cameras and took photos of their own. "What I'm happy about is that there are people here from all age groups. It's just a really fun event—lots and lots of cultures are represented." 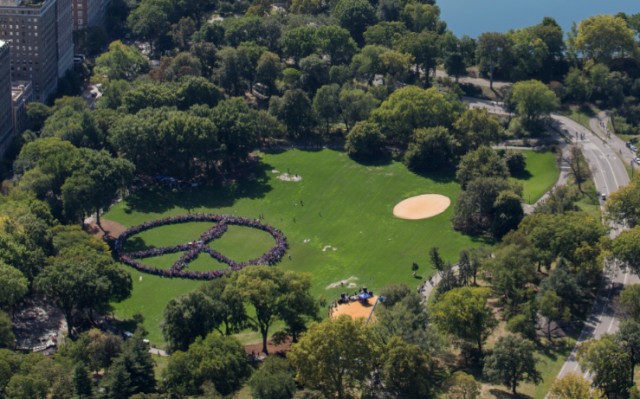 Peacenik partiers were made to wait over two hours before an official aerial photoshoot and record-determining headcount attempt took place, but performances from local grade school band and The Kinks' Ray Davies helped pass the time before Yoko Ono herself finally arrived to deliver a short pep talk.

"We tried to clean up the world with hatred, anger, and violence, and it didn't work you know? So now we're doing it with the power of love," Ono said. "The fact that this is the best birthday present to John. Thank you!"

Radio DJ Ken Dashow of Q 104.3 served as the day's honorary emcee ahead of Ono's appearance, encouraging those standing to form the sign. "This picture is going to be retweeted across the entire world! Dashow cheered. "You're standing here for them, for people in Syria, for everybody around the world."

The day's messages of peace and love were by no means limited to adults. Hundreds of schoolchildren attended the record-attempt on field trips, including 215 students from Central Park East II. Third grader Roxanna told Gothamist that to spread peace in the world "You can throw a party, or if you see some poor people you can give them a little snack."

When it came time to take the crowd's official count, strains of "Give Peace a Chance" blasted out of speakers and a sea of peace signs waved in the bright sun. A beautiful moment, but not quite enough, it turns out, as Guinness officials later confirmed that day's attendance fell short of the 5,000 mark that would have been needed to set a new record.

But nothing could dampen the spirits of the day, and near the peace sign's center, Gaspar Magistar of Toronto set flowers onto a small table and handed out birthday cards for children to write down kind wishes for Lennon. Space on those card filled up fast, and in between shouts of "Our living legacy is now!" Magistar admitted that he most certainly should have brought more.

#john lennon
#peace sign
#yoko ono
#original
Do you know the scoop? Comment below or Send us a Tip
A new Gothamist is coming! We’ve moved comments over to our beta site. Click here to join the conversation and get a preview of our new website.