While most New Yorkers could simply step outside and see the Great American Eclipse from rooftops or sidewalks, thousands headed to Central Park seeking a little more space to spread out and enjoy the celestial event. "The Sheep Meadow is our favorite place," Talia Barrington explained.

Barrington, 29, and Jordan Cowan, 27, headed to the 15-acre expanse with their homemade pinhole camera, which they made earlier that morning. "We realized we wouldn't be able to get glasses so we bought this six dollar tube from FedEx," he said, adding, "The foil came pretty easily."

The four-foot tube attracted the curious, and Cowan said that was part of the plan, "We figured [the pinhole camera] could be our bartering chip to ask people to use their glasses."

Over at Bethesda Terrace, the Amateur Astronomers Association of New York set up six telescopes for the public to view the eclipse, resulting in a huge line that circled around the fountain. The group set up at 12:15 p.m. and president, Marcelo Cabrera, said that they'd seen 500 people per hour. 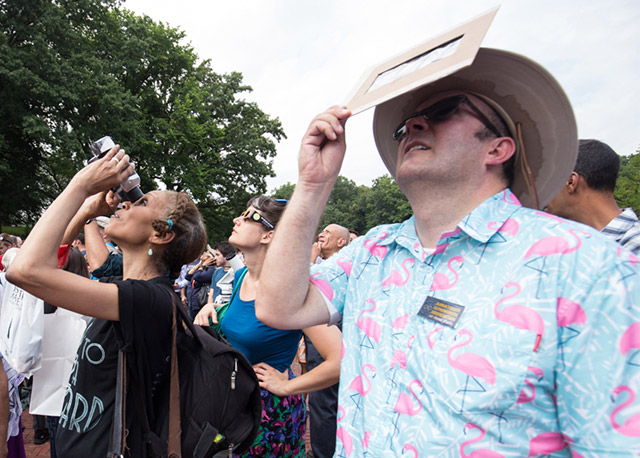 They also distributed binoculars, solar glasses and portable solar viewers for parkgoers to catch a glimpse of the eclipse. Cabrera has seen two solar eclipse—one in Egypt and a cloudy one in China. "I didn't go to the path of totality [this time] because I thought it would be selfish," he explained. "I have all this equipment, so I thought I should stay here and let everyone enjoy it."

As the peak partial eclipse (71%) neared at 2:44 p.m., clouds drifted over the sun and moon, prompting cheers when they'd momentarily clear. Cabrera believed that in spite of the huge hype for the Great American Eclipse, there was something very human in our desire to gather for it: "We're so used to seeing something with technology or photos from the Hubble Space Telescope. But this is something we can see with our own eyes."

#central park
#eclipse
#great american eclipse
#solar eclipse
#original
Do you know the scoop? Comment below or Send us a Tip