It would have been easy for the Brooklyn-based Swiss-born artist Kimou Meyer to get swept up into romantic ideas about Old New York when he designed the "T. SQ Newsstand." Instead, Meyers explained, the fully functional art installation has a firm grip on the present.

"I had a fantasy of New York because I had never been there," Meyer said. "After art school I got hired and had the opportunity to go to New York, but by the time I got here the New York I had in mind was gone already." Meyer said he lived vicariously through a picture of the past and, in turn, noticed vestiges of the city he'd once imagined. 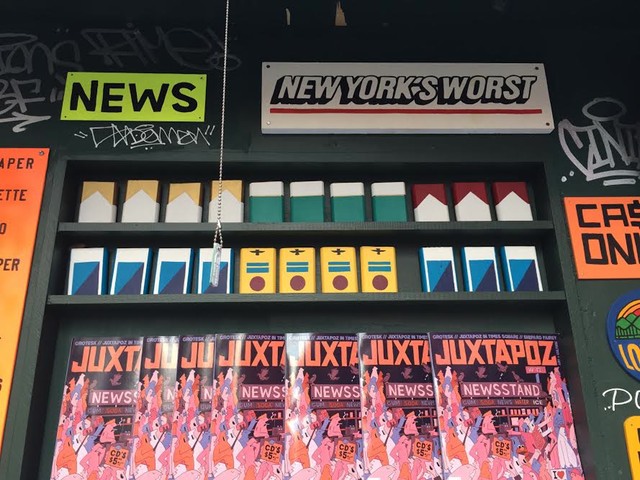 "One of the things that struck me was the newsstands, which, even in the early 2000s still looked like old New York. It was kind of a relic of the past," said Meyer. He photographed them, drew them, added his own contemporary flourish, and eventually his work landed on the cover of Juxtapoz, an arts and culture magazine based in California. The publication's editor-in-chief Evan Pricco later reached out to Meyer to create a life-size 3D version of his design for the Art Basel, but today is the first time the newsstand has been fully operational.

Meyer explained, "For us, this was an awesome opportunity to display some independent publications and to be in the middle of Times Square where every else is digital. It's an homage but it's also to say that print is alive." 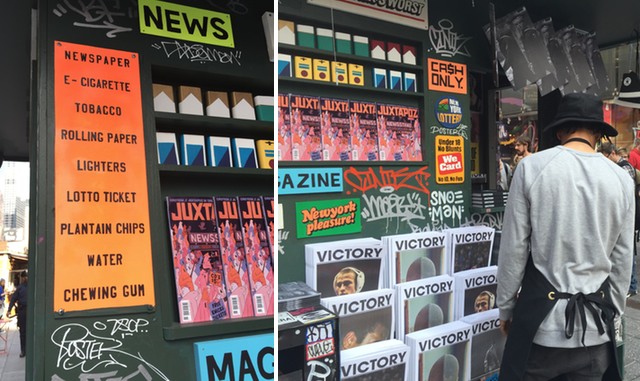 So, for now, the steady march toward the death of print has been postponed. Since noon today, clerks have been selling issues of Juxtapoz and Victory, and for the next ten days Meyer will welcome guest artists who will sell special edition publications, art prints and other merch.

"I think things go in cycles," said Meyer. "I compared it to the record industry: When CDs came, it destroyed vinyl; when mp3 came it destroyed CDs. People are like, 'Why would I continue to keep those ugly CDs?' But then vinyl became an amazing object and the vinyl sales have never been that high. That's why we keep doing publication."