Tomorrow, the New-York Historical Society will unveil a treasure trove of historic comic book stuff—from Adam West's Batmobile to early drawings of all your favorite superheroes.

Walking into "Superheroes In Gotham," you'll be greeted by the Batmobile in the museum's lobby, an authentic set piece driven by Adam West in the 1960s television show. In order to get the custom 1966 Ford Galaxy in there, several glass panels from the building's entrance had to be removed. #WorthIt.

Next you'll step into a room that will educate you on the origins of six superheroes: Superman, Batman, Iron Man, Wonder Woman, Captain America, and Spiderman. Given the exhibit is at the Historical Society, there is a huge emphasis put on the genesis of these characters, though it will also include more recent characters inspired by a more contemporary Gotham City. As a whole, the exhibit contemplates "the importance of New York as a creative force behind this uniquely American mythology." After all, the art form and cultural phenomenon was born in New York City. 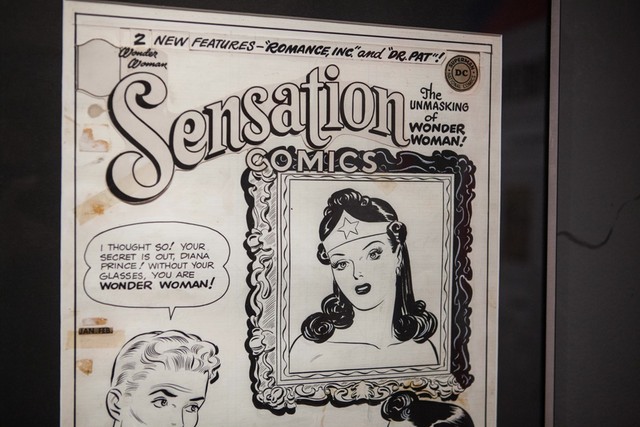 Click through for a preview of the expansive exhibit, where you'll also find old issues like Amazing Fantasy #15, Superman's original costume from the 1950s TV show, and a typewriter used by Jerry Siegel to create the Man of Steel's original story lines. Many of these items are normally nearly impossible to see, so you'll want to POP! (sorry) over there before February 21st to take it all in.