Photos: The Strange History of NYC's Swinburne and Hoffman Islands We have this vision of immigrants arriving by ship, seeing the Statue of Liberty and landing at Ellis Island to start their new American lives. But thousands of people never made it that far. Instead, they were detained at Swinburne and Hoffman Islands, two tiny islands in our harbor that were used as quarantine islands from the 1870s until the 1920s.

According to Professor James Colgrove at the Mailman School of Public Health at Columbia University, ships coming into New York harbor would be stopped before Ellis Island. He says:

As the ship steamed into lower harbor, a tugboat would have pulled up alongside the boat and a doctor or a few doctors would have boarded the boat and all the passengers would have been asked to line up on deck. And the doctors would go down the line and give everybody a very quick once over... This was really looking for just the most visibly ill people. You might be looking for kids who were covered with measles spots, somebody with smallpox. Someone who was obviously very ill. The doctor might have popped a thermometer into somebody’s mouth if they weren't sure. But basically this was just a very quick once over. And if you were unfortunate enough to be showing symptoms—if you were extremely flushed, if you were vomiting, if you had some kind of visible sign of disease—they would have then pulled you off the boat.

Immigrants who arrived visibly ill would be taken by tugboat to Swinburne and Hoffman Islands, just south of where the Verrazano-Narrows Bridge is today, about a mile off of Staten Island’s South Beach.

The story of how Swinburne and Hoffman came to exist is a bizarre chapter in New York’s history. Before the islands existed, many immigrants who arrived with potentially contagious diseases were detained at the Marine Hospital, a compound of buildings on Staten Island known as “The Quarantine.”

Back then, New Yorkers were dying from all sorts of maladies we rarely hear about today: smallpox, diphtheria, cholera. Much less was known about contagious diseases and in the 1850s, and there were frequent outbreaks; when they occurred on Staten Island, locals blamed The Quarantine, particularly after a bad outbreak of Yellow Fever that hit.

Professor Colgrove explains, "Yellow fever was one of the most frightening diseases because it spread in really inexplicable ways. We understand now that it's spread through mosquitoes, but disease in general struck very much at random which is what made it so frightening."

On the night of September 1st, 1858, a few dozen men broke down the brick walls surrounding The Quarantine. They entered the compound with matches and straw and set almost every building on fire. There were no fatalities because the staff and patients had been given advance warning to evacuate the premises. Given that Staten Islanders had been trying to get rid of this place for decades, no one was all that surprised the night The Quarantine burned down. The mob returned the following day to burn down more.

In the years following the fire, no one could agree where to put the immigrants who arrived sick. The city eventually agreed to build two islands from landfill on a shoal in the Narrows: these were Swinburne and Hoffman. 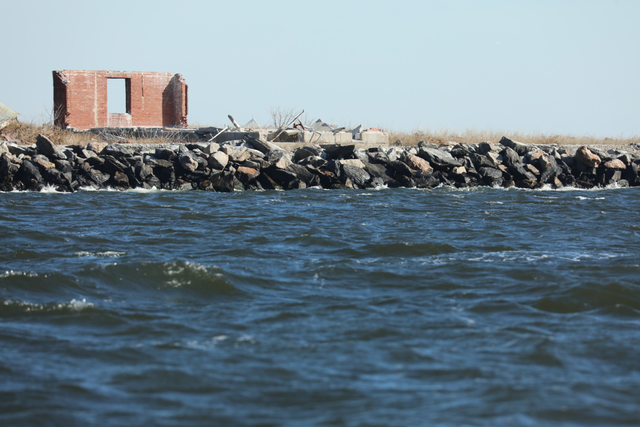 The conditions were horrific, and there was often overcrowding. In 1901, authorities held over 7800 people on Hoffman alone. But detailed records have disappeared, and the number of people who made it off alive or died on the islands is not known.

In the 1920s when open immigration was drastically reduced, they were no longer needed as quarantine islands. The NY Times declared them "ghost isles" in 1949, noting they were "orphaned amid relics of a more auspicious past." Since then, Swinburne and Hoffman have been used for many unusual purposes: a place to quarantine sick parrots; a training base for the Merchant Marines, and in the 1960s, a film crew was arrested for shooting pornographic films on the islands.

There’s not much left to see over there anymore—after years of being subjected to everything from vandals to arson, the most destructive force was Superstorm Sandy. All that remains today is an old dock off of Hoffman and some crumbling brick walls and a smoke stack, possibly from a crematorium, on Swinburne Island.

The islands are now owned by the National Park Service, and while visitors are not welcome, several tour companies offer boat rides that stop nearby so people can see the wildlife. Today Swinburne and Hoffman have become sanctuaries for herons, gulls and seals.

Listen to Amanda Aronczyk talk about the islands on WNYC:

"Germ City" runs until April 28th, 2019 at the Museum of the City of New York. WNYC is presenting a series of Germ City stories, as part of a collaboration with the Museum and the New York Academy of Medicine—you can read them here.

#germ city
#history
#Hoffman Island
#Swinburne Island
#original
Do you know the scoop? Comment below or Send us a Tip