Photos: The Statue Of Liberty Museum Opens On Liberty Island Liberty Island is getting a new attraction this week when the Statue of Liberty Museum, a 26,000-square-foot exhibition space exploring Lady Liberty's history and influence, opens on May 16th. The space features three distinct gallery spaces that chronicle the 133 years the New Colossus has lifting her lamp beside the golden door. While there was already a museum in the monument’s base, this one is intended to be distinct and front-facing for the 4.5 million people who visit the island every year, on average.

"We looked at the small museum inside the pedestal and thought, 'Wouldn’t it be wonderful to take this experience outside so more people can experience it?" John Piltzecker, Superintendent of the Statue of Liberty National Monument and Ellis Island, said at a press conference on Monday morning.

The museum experience begins in a theater where visitors view a short film detailing the legacy of New York's iconic, neoclassical sculpture. “We knew that 500 people arrive every 20 minutes during the summer, and we knew that they would get off of the ferry and come in. What we tried to do is get as many people seeing the movie, because we thought that that was 10 minutes that would really get a lot of the messaging across,” Edwin Schlossberg, exhibit designer for The Statue of Liberty Museum, told Gothamist. "And then when you come out of the theater, you have a choice: you can either go into the gallery and see the exhibits, or just go right out the door. We wanted to make that the flow." 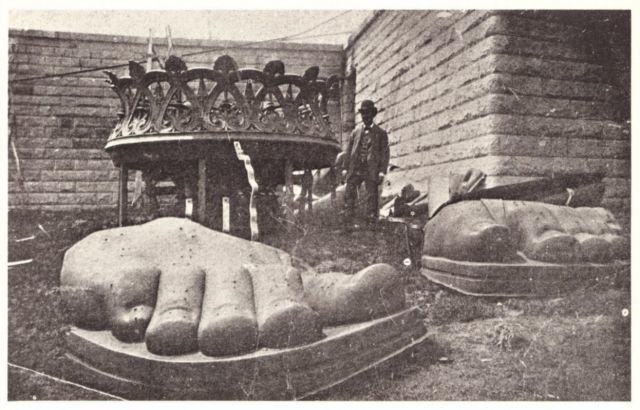 Another exhibit tells the story of the statue's beginnings in Frédéric Auguste Bartholdi’s famous French workshop, and tracks her construction over time. Everything from Bartholdi’s sketches to posters advertising the internationally-recognized symbol round out the timeline of the statue’s design to official dedication. On the other end of the museum, which is a short but densely-packed experience from start to finish, is the space’s crown jewel: The Statue of Liberty’s original torch, which was replaced during a restoration in 1986.

With 2012’s Superstorm Sandy in mind, architects designed the museum—which is 19 feet above sea level—to withstand storm winds and flooding (there’s 10 feet of hollow space, with 84 flood openings, below).

"The building was really seen as not just providing a space for a museum to tell the story, but also that the building itself would be more of a park area for visitors," Cameron Ringness, lead designer at FXCollaborative, told Gothamist.

The roof is a garden pavilion planted with native meadow grasses, and offers visitors an unobstructed view of Lady Liberty and Lower Manhattan. And the stony creek granite used for the museum is the same material that makes up the statue’s pedestal.

“We were more interested in relating to the fort than the statue because the statue is this special, stand alone thing,” Ringness said. “We wanted the building itself to be much more in the character of the fort, because forts are great inspiration for landscape integrated forms.” 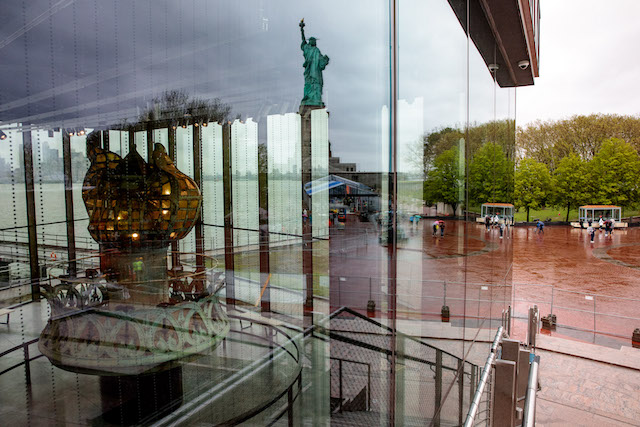 The Statue of Liberty Museum is part of a $100 million undertaking funded by The Statue of Liberty-Ellis Island Foundation. Admission to the new museum is free with the purchase of a ferry ticket to either Liberty or Ellis Islands. And for those who can't make it to the physical building, there's a free AR app which aims to transport you into the museum and the Liberty Island environs that surround it, both past and present.